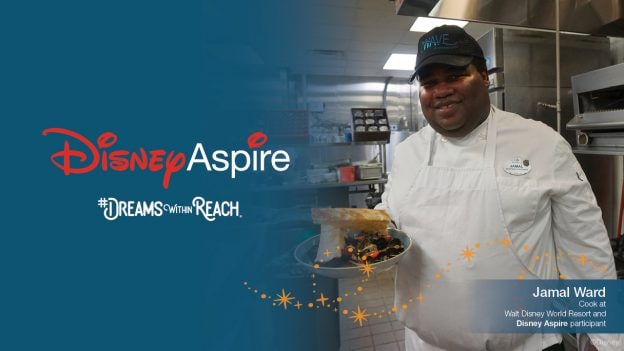 For nearly a year, Disney Aspire has been offering hourly Cast Members the opportunity to put their dreams within reach through a variety of certificate and degree programs 100% covered by Disney. Cast Members can now pursue their career dreams, like Jamal Ward, a cook at The Wave… of American Flavors at Disney’s Contemporary Resort at Walt Disney World Resort, who has gone back to high school at age 31 and is on the road to his future dream law enforcement career. We’re excited to share Jamal’s journey in this installment of our #DreamsWithinReach series, following inspiring Cast Members as they reach their goals.

Growing up in the U.S. Virgin Islands, Jamal developed a culinary passion at a young age, as he always enjoyed cooking and baking with his mom. “She passed on her love of food and cooking to me,” said Jamal.

Jamal says that the best part about being a cook is, “getting to make different dishes and working directly with the chefs as the menu changes. I love how the chefs treat me as a student and help me to grow in my career. They are always willing to share everything they know and help me get better.”

After having his first child at a young age, Jamal made the tough decision not to finish high school so that he could start working to take care of his family. “At that point, I felt that working and earning money was more important than pursuing my education. I attempted to go back to school in 2007 before working at Disney, but I didn’t have the support I needed to be successful. After joining Disney, I not only found the Disney Aspire program, but the support I needed from my leaders to be successful in earning my education.”

Jamal was initially hesitant to sign up for Disney Aspire because he wasn’t sure if he would have the time to balance school with work and raising his children. “However, with everything paid up front by Disney, I had every reason to do this, and do it now,” he explained.

He became convinced to enroll in Disney Aspire’s High School Completion Program after a heart-to-heart phone call with his younger brother. Jamal said, “He was the one who convinced me to enroll. He said, this is something you have to do – apply now.” Jamal decided that it was time to work through his fears and to take steps to complete his GED. Originally scheduled to graduate in 2020, he studied diligently during work breaks and at night while his kids slept and graduated in only four months!

Jamal’s educational journey didn’t stop at earning his high school diploma. Through Disney Aspire, he’s now enrolled in Valencia College where he is earning A’s and exploring his passions in business and hospitality management to pursue a future career in law enforcement. With his return to school, Jamal hopes to inspire his young kids. “If I can go back at my age and do it, they definitely can.”

We’re thrilled that Jamal is able to participate in Disney Aspire to reach his career goals and even discover new passions.

“Disney Aspire has opened up so many doors for me, and I’m so grateful for this amazing program,” said Jamal.

Since launch in 2018, this unique program has been helping Cast Members pursue their dreams with having 100 percent of the costs of tuition and books covered by Disney. We’re proud to provide resources that help our Cast Members reach their dreams and achieve their goals.

Don’t forget to check back next month for a special edition of #DreamsWithinReach as we celebrate one year of Disney Aspire!