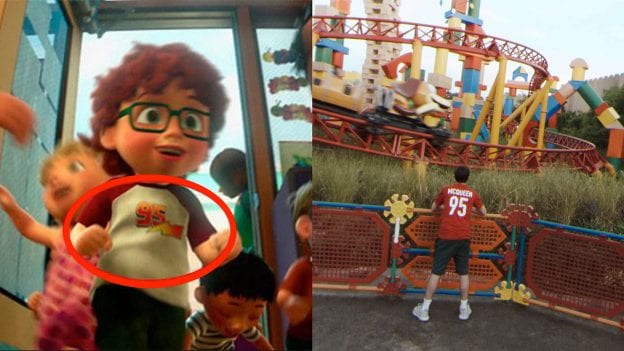 While we’ve been celebrating the release of “Toy Story 4” and one-year anniversary of Toy Story Land, several eagle-eyed Disney Parks Blog fans have been busy discovering fun Pixar surprises in the land’s new Google Street View imagery. If you haven’t seen, no need to search – we’ve got a look at the land’s hidden Pixar Easter eggs!

The Easter eggs in Toy Story Land include a sports jersey bearing the name “McQueen” and the number “95,” in reference to Lightning McQueen, the protagonist from the “Cars” films pictured at the top of the story. Also, a guest posed as Sid, the main antagonist from the first “Toy Story” film can be found as well as a shirt featuring the Buy n Large logo, a fictional brand spanning across the Pixar films.

Also, while exploring the land, you can find a guest playing Miguel’s guitar from the film Coco, a toy version of the Pizza Planet truck, which appears in each Pixar film and “A113,” numbers representing a classroom at the Cal Arts art school that appear in each and every Pixar film.

As most of you know, Pixar has become famous for including Easter eggs in their films and shorts.  And when Google Street View imagery was being captured at Toy Story Land, teams took the opportunity to bring this iconic tradition to life in a brand-new medium by hiding the special Easter eggs for you to find.

Toy Story Land is part of a series of Disney Parks imagery on Google Street View that includes theme parks, water parks as well as a variety of areas at Downtown Disney District and Disney Springs. You can also see what it’s like to tour Pandora – The World of Avatar, Magic Kingdom Park and more.

Check out Toy Story Land in Google Street View and other Disney Parks locations to help you start planning your next Disney vacation!