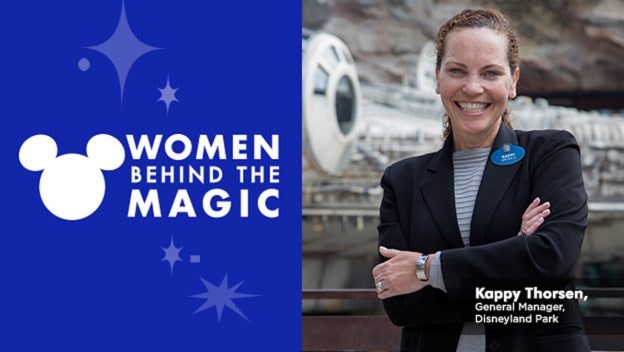 When guests visit Star Wars: Galaxy’s Edge, now open at Disneyland Resort, they can experience everything from out-of-this-world galactic treats to thrilling flights on the iconic Millennium Falcon, and even mingle with local Batuuan residents! These residents bring the land to life and selecting our cast members to fill those roles was a crucial element, one that was led by General Manager of Disneyland Park – Star Wars: Galaxy’s Edge, Kappy Thorsen. We’re eager to share Kappy’s Disney journey and her work that helped bring the land to life in this installment of #WomenBehindtheMagic!

Kappy leads cast members and teams across the Disneyland Resort to create exciting experiences for guests each and every day. One of her most recent experiences even took her to a galaxy far, far away as Kappy spent the last two years preparing for the opening of Star Wars: Galaxy’s Edge.

But before she started helping create the planet Batuu, Kappy grew up working for her family at  Roaring Camp Railroads, a historic tourist railroad in the Santa Cruz Mountains. Whether she was scooping ice cream, selling tickets, or helping to clean restrooms, she “did it all” and took great pride in being a part of the family business. In fact, it was working with her family’s business that first sparked her interest in theme park operations. Each year, Kappy and her family would make the more than six-hour drive to visit the Disneyland Resort – a place Kappy knew she always wanted to work ever since she was a child.

“Working for Disney has always been a dream of mine,” she shared. “My father was inspired by Disneyland – he was creative, artistic, and had an entrepreneurial spirit. I tried to emulate him from a very young age.”

Heavily influenced by her parents and love of art, design and business, Kappy earned a Bachelor’s of Arts degree from San Jose State University. Upon graduation, she planned on applying for Disneyland in one of these fields. However, her father unexpectedly passed away, and her mother took over the family business which instantly changed Kappy’s path.

“I put my Disney dream on hold to assist my family. I watched my mom become an influential female business leader in the community,” she reflected.

More than a decade later, Kappy returned to pursuing her Disney dream. She applied for and accepted her first role at Disneyland park as the assistant manager responsible for the iconic steam trains. As she began this role Kappy was inspired by her mother’s leadership, something she continues to be motivated by today.

“I often refer to my mom as my ‘hero’ because of her great courage, outstanding business achievements and character,” she says. “I would not be where I am today without her as my role model.”

In her 20 year Disney career, Kappy has had various opportunities to advance her career across the resort, including attractions, guest relations, main entrance, transportation and parking, line of business, food and beverage, custodial and retail.

“Each role taught me something new and challenged me in different ways, which prepared me for today. Every day is an adventure,” she shared.

One of her biggest adventures to date was her role in Star Wars: Galaxy’s Edge. A lot of coordination, preparation and partnerships were required to open a land of this scale. Preparing leaders and cast members for their new roles as citizens of Batuu was a monumental undertaking for the operations team and countless partners, of which she is very proud. Her days preparing for the opening of the land were often varied with different responsibilities. Regardless of the projects, one element always remained the same, interacting with cast members – the most rewarding part of her day.

“Our cast’s dedication, passion and love of the Disney brand and Star Wars franchise is contagious,” she says. “They put everything into creating magic for our guests, which is amazing to watch! When visiting Star Wars: Galaxy’s Edge, guests can interact with cast members in a whole new way – learn their stories, explore and play throughout the land like never before.”

For Kappy seeing our cast members fully immersed in the story, interacting with the guests, was quite a memorable moment.

“It was an emotional experience on many levels,” she explained. “My team and I helped bring Star Wars: Galaxy’s Edge to life for our guests. A dream job come true.”

Kappy is one of the many women making magic for Disney guests and fans around the world. Guests can meet the citizens of Batuu when they visit Star Wars: Galaxy’s Edge now open at Disneyland Resort.  Stay tuned for next week’s installment in our #WomenBehindtheMagic series as we share more stories of the amazing women who helped make Star Wars: Galaxy’s Edge a reality!