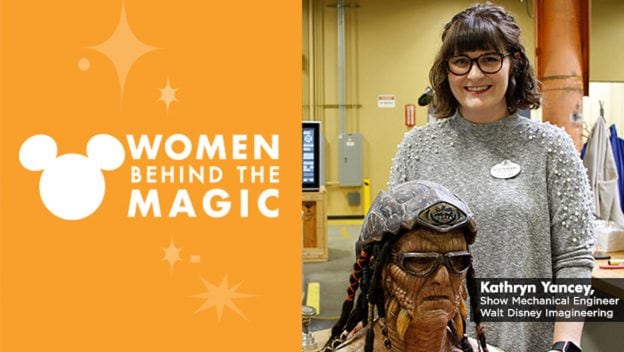 Star Wars: Galaxy’s Edge is a story-driven land, full of beloved characters that transcend boundaries and immerse you in an unforgettable experience. These characters might even be one of your favorite aspects of the new land! And all made possible thanks to amazing talents like Kathryn Yancey, Show Mechanical Engineer at Walt Disney Imagineering. Kathryn is one of the many women making magic for Disney guests and fans around the world, and we’re excited to share her Disney journey with you as we explore the crucial role she played for the land in this installment of our #WomenBehindtheMagic blog series!

Kathryn’s been a part of designing fan-favorite characters at our parks all over the world by leading 3D modeling, engineering calculations and analysis. With a career that has taken her on a high seas adventure with Pirates of the Caribbean: Battle for the Sunken Treasure at Shanghai Disney Resort, to the kingdom of Arendelle with Frozen Ever After at Walt Disney World Resort and most recently to a galaxy far, far away with Star Wars: Galaxy’s Edge, some might wonder how it all began.

Well like many, Kathryn recalls fond family visits to Disneyland Resort. Only for her, she was always enthralled by the small detailing of the park. From riding attractions and taking in the way bottles bobbed in the water, to admiring delicately designed rockwork, Kathryn set her dreams on becoming an Imagineer.

“It was those details that led me to Imagineering,” she says. “I loved the idea that someone put so much love and attention into the tiniest detail just to give the guests a fully immersive experience.”

At Seattle Pacific University, Kathryn aimed to combine her favorite things in a way that challenged her to grow. After a search engine query of “math + art + Disney,” she discovered Walt Disney Imagineering and pursued a major in mechanical engineering. As she explored machine design, system dynamics, and even anatomy, prosthetics and artistic motion, she gained hands-on experience with projects that helped her learn and expand her skill set. All this lead up to her first day at Imagineering, where Kathryn pinched herself to make sure it was real.

“It was my dream,” she shared. “When I was being shown around our animation shop, it felt like home.”

As part of the team who brought the pirate turned “legitimate” businessman Hondo Ohnaka to life at Millennium Falcon: Smugglers Run, Kathryn says that it’s an amazing feeling to be able to bring iconic and beloved characters to life for Disney guests. Now, Kathryn contributes to the figure design of Walt Disney Imagineering’s A1000 series of Audio-Animatronics figures, a project she feels particularly proud of knowing how important these characters are to Disney fans. In fact, it was seeing her work in a park for the first time that made her realize she didn’t just enjoy her work – she loved it. Kathryn recalls the first time she stood outside of an attraction that featured her work. As guests marveled at the figure, all Kathryn could focus on was the huge smiles on their faces.

“That’s why I do what I do,” she says. “To bring happiness into the world by bringing people’s favorite characters to life.”

But bringing these beloved characters to life isn’t a simple task. It takes a team of Imagineers to make these special creations for guests, and Kathryn considers hers family. Often relying on her each other’s talents and passions, she learns from her fellow Imagineers locally in Glendale, Calif., and get the opportunity to learn from Imagineers all over the world as well.

“Working with diverse teams is so important because it teaches us to think outside our own boxes,” she says, noting that the work for a character might combine effort from Imagineers across the globe.

Throughout her experience, Kathryn has learned that having a great team around you is part of the key to success. Her advice for students looking to reach their goals is to never lose sight of your dreams and those around you.

“Keep going and your hard work will pay off, and remember that it’s okay to ask for help,” she says. “There are people in this world who want to help you along your journey and if you fall, they will be there to help you up.”

Looking ahead, Kathryn is excited for the future of Disney Parks and Walt Disney Imagineering. Whether it’s working on Star Wars: Galaxy’s Edge, or beyond, she says she’ll continue to learn something new every day from herself, her team, or the exciting project of the moment.

“It shows how we’re pushing the boundaries,” she says. “The combination of the incredible creative and technical minds at Imagineering continues to amaze me – and really, the sky is the limit!”

Guests can see Kathryn’s work, including Hondo Ohnaka at Star Wars: Galaxy’s Edge, now open at Disneyland Resort, and opening on August 29 at Walt Disney World Resort! Check back next week for another installment in our #WomenBehindtheMagic series. Whether writing stories for guests to uncover or designing the spaces they’ll explore, we can’t wait to continue to share more stories of these remarkable women who made the creation of Star Wars: Galaxy’s Edge possible!