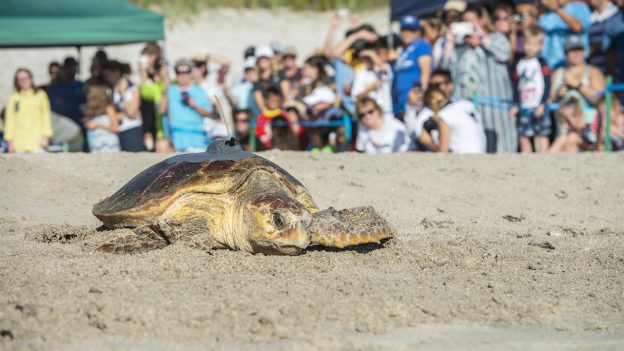 12th Annual Tour de Turtles is Off to a Swimming Start

Did you know Disney’s Vero Beach Resort is one of the most important turtle-nesting habitats in the western hemisphere? For more than a decade, Disney’s sea turtle conservation team has conducted daily surveys along nearly five miles of sea turtle nesting beach at the resort. These cast members work to identify, mark and monitor sea turtle nests, as well as determine the hatching success of each nest. This helps us document sea turtle populations and conduct the conservation science, protection and outreach needed to ensure their survival.

Last weekend was extra special for these cast members and our guests at Disney’s Vero Beach Resort, as researchers from the Sea Turtle Conservancy (STC) and the Disney Conservation Fund (DCF) team came together at the resort for the 12th annual Tour de Turtles. Tour de Turtles is a fun, educational journey that follows the migration of sea turtles from their nesting beaches to their feeding grounds.

As part of Tour de Turtles, the STC and Disney’s DCF team worked together to outfit two female loggerhead sea turtles with satellite telemetry devices and sent the turtles back out into the ocean in a great “migration marathon.” This year’s turtles are named Ariel and Ursula, in honor of the 30th anniversary of Disney’s animated film, The Little Mermaid. It’s only fitting, as these turtles probably hatched around the time that the original film was released.

The data collected during Tour de Turtles helps researchers, conservationists and governing agencies make more informed decisions about sea turtle conservation methods and policies. Since the launch of the event in 2008, STC and Disney have partnered to study twenty loggerhead sea turtles outfitted with satellite transmitters and released from Disney’s Vero Beach Resort. As a result, scientists have been able to identify different foraging behaviors and regions, as well as seasonal movements based on water temperatures, which help determine which areas should be classified as critical habitat spaces for the loggerheads population. The Disney Conservation Fund has also directed more than $3.5 million to support sea turtle research and conservation efforts in 24 countries around the world.