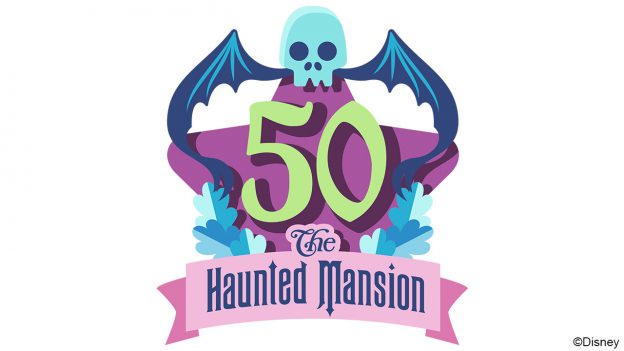 From now until August 10, your limited-time Haunted Mansion achievement will feature Sarah “Sally” Slater, a delicate young girl, who can be found inside the portrait chamber of the Haunted Mansion balanced on a tightrope, as if from a circus.

The achievement from August 11-18 features Madame Leota, who floats in the dead center of the séance circle, calling out for “serpents and spiders, tail of a rat,” to bring about the happy haunts.

From August 19-24, you can earn an achievement that features a watchman of the Haunted Mansion and his dog. You can find the watchman outside the open gates of the cemetery, with his knees quaking in fear and his scrawny dog quivering in terror.

If you collect all three in the app, happy haunts will materialize as you are issued a fourth, special 50th Haunted Mansion anniversary achievement.

The Play Disney Parks app allows you to immerse yourself in the stories of Disney Parks by collecting unique achievements, engaging in interactive experiences and testing your Disney knowledge with trivia. This mobile app connects family and friends to the theme parks with unique experiences and activities that bring surrounding environments to life.

Download the Play Disney Parks app before you come to the parks to ensure that you make memories and earn achievements that will haunt you for a lifetime!

Message, data and roaming rates may apply. Availability subject to handset limitations, and features may vary by handset, service provider or otherwise. Coverage and app stores not available everywhere. If you’re under 18, get your parents’ permission first. Separate theme park admission required