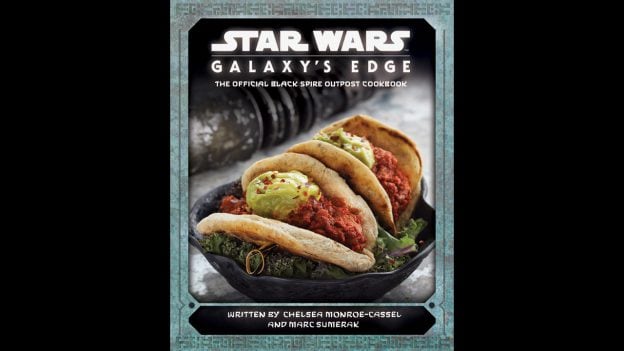 Now open at Disneyland Resort and soon to open at Walt Disney World Resort, Star Wars: Galaxy’s Edge is filled to the brim with new adventures, familiar friends, and of course, intergalactic eats. This immersive themed land is set on the never-before-seen planet of Batuu in a place called Black Spire Outpost. The remote trading port serves as a busy crossroads for smugglers, traders, and adventurers traveling the Outer Rim and Wild Space, but it is also home to many locals with a deep history of “farm to table” style whole foods and cooking traditions passed down through the generations.

Soon, you’ll be able to bring home a variety of new recipes and cooking traditions with the all-new Star Wars: Galaxy’s Edge cookbook. This book is the ultimate source for creating out-of-this-world meals and treats from Black Spire Outpost and beyond. Inspired by the stories and cuisine found in Disney’s biggest single-themed land, the cookbook is written from the perspective of Strono “Cookie” Tuggs, former head chef at Maz Kanata’s castle on Takodana.

After his time on Takodana, Tuggs went on to operate a food freighter (known as “Tugg’s Grib” – a ‘traveling diner for diners traveling’) serving countless planets from across the galaxy. He now boasts an encyclopedic knowledge of the galaxy’s culinary delights born of decades of travel, research, and a love of the holovids of the legendary chef Gormaanda. In the Star Wars: Galaxy’s Edge Cookbook, Tuggs’ first cookbook, Star Wars fans will find a wealth of delicious intergalactic recipes designed for home cooks of all skill levels. It will be published by Insight Editions and is coauthored by Chelsea Monroe-Cassel (an author of several bestselling medieval fantasy-themed cookbooks) and the award-nominated writer and editor Marc Sumerak, who’s work includes Hidden Universe Travel Guides: The Complete Marvel Cosmos and Guardians of the Galaxy: Creating Marvel’s Spacefaring Super Heroes.

The Star Wars: Galaxy’s Edge Cookbook will hit the shelves just in time for the holiday season in November, 2019. For more information and to purchase, head on over to the Insight Editions website.