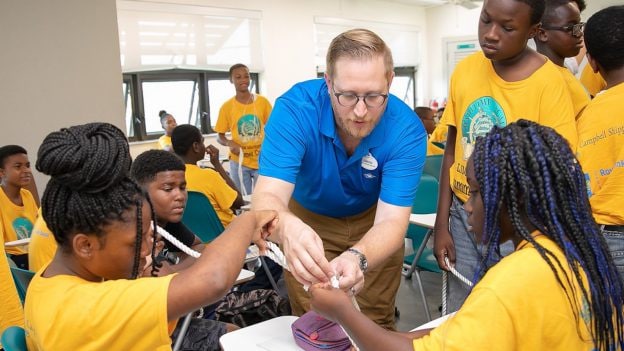 Some of my favorite memories are from my days spent at summer camp. I was so proud to hear that Disney Cruise Line sponsored the summer camp program at the LJM Maritime Academy in Nassau for more than 40 students, ranging in ages from 12 to 16 years old.

During the two-week program, students were given the chance to learn about the local and global maritime industry and gain a better understanding of career opportunities in the industry. They also explored various aspects of maritime-oriented jobs and learned how traditional STEM subjects apply to many roles in the field.

Our very own, Simon Morgan, Disney Cruise Line Marine Fleet Training Manager, traveled to Nassau to spend the day with the students and speak to them about his role and what it’s like to work onboard a cruise ship. He also led a special class on tying nautical knots – a fundamental seamanship skill. Believe it or not, there are more than 40 different nautical knots used by seafarers today. Who knew?

Simon shared with us that he hoped his time spent with the students opened their minds to the many opportunities in the maritime industry and helped inspire the next generation of seafarers.

Here’s a look at their special day at camp.

Since 2011, the LJM Maritime Academy has worked to provide local professional-level training to future maritime professionals in The Bahamas. Dr. Brendamae Cleare, president of LJM Maritime Academy, told us that they were extremely grateful for Disney’s sponsorship as this year’s summer program would not have been possible without our support.

Disney Cruise Line has partnered with the LJM Maritime Academy in a variety of different ways for many years. Most recently, we announced that we will sponsor four scholarships at the Academy for female cadets aspiring to become ship captains and shipboard leaders. The scholarships, one for each of the ships in the Disney Cruise Line fleet, will include tuition to the three-year program – two years of study at the academy and one year of service aboard a Disney ship.

Other programs include the debut of Captain Minnie Mouse who will make the rounds on all Disney ships and visit port communities – including those in The Bahamas – to inspire the next generation of female leaders in the maritime industry. Later this year, Captain Minnie Mouse will also appear in an all-new, onboard youth activity being developed for Disney Cruise Line ships where young captain hopefuls will practice STEM skills in a fun, interactive marine-themed activity.

The maritime industry provides many jobs in the Bahamas. Several of the LJM Maritime Academy students Simon met with are excited to work onboard a ship one day. Maybe even a Disney Cruise Line ship!

We definitely hope this will be a summer to remember for these students.