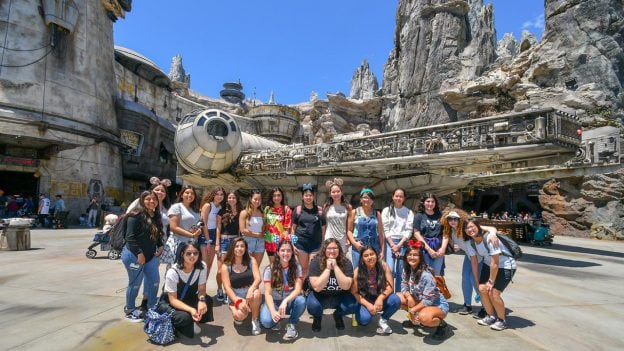 Students participating in this year’s Girls Who Code Summer Immersion Program recently visited Disneyland Resort for a special peek at the technology behind the magic at Disney Parks, including some of the exciting innovations at work in Star Wars: Galaxy’s Edge! A nationwide non-profit organization, Girls Who Code works to teach high school students about technology and close the gender gap in technology fields by providing computer science education to girls.

The trip took the group to a galaxy far, far away, as they visited the planet Batuu and learned a bit about some of the experiences and technology that guests may encounter on their visit. The group heard from various speakers about the Play Disney Parks app, which allows guests to explore their Star Wars: Datapad within the land and explore in a whole new way, and learned about how Disneyland Resort has been utilizing a virtual queue system to ensure that guests have a great experience when they visit Star Wars: Galaxy’s Edge.

“It was cool to see how everything works. It made me think, ‘I want to do this when I grow up and get my career started,” said Simone.

“It’s been really fun,” Isabella added. “I feel like we’ve learned so many different things, and we’ve been able to work in groups which has been really fun because I’m not so used to teamwork, but Girls Who Code has really helped enhance that skill.”

Earlier this summer, the group also took part in other unique field trips, including visits to Walt Disney Imagineering Research and Development, Inc., Walt Disney Animation Studios and the Walt Disney Studios StudioLAB. They also heard from speakers representing a variety of fields across Disney, including Danielle Costa, Vice President of Visual Effects at Marvel Studios and Susan O’Day, Executive Vice President of Enterprise Technology and Chief Information Officer of The Walt Disney Company. They even got to enjoy their own screening of Disney and Pixar’s “Toy Story 4” at the Studio Theatre on The Walt Disney Studios Lot!

“My favorite part of the program has been getting to know all the girls,” Christina said. “We’re not all from the same places or ethnicities – we’re all different. I think getting to know these girls is really fun, and also learning a lot of the different languages and getting exposure to technology and coding.”