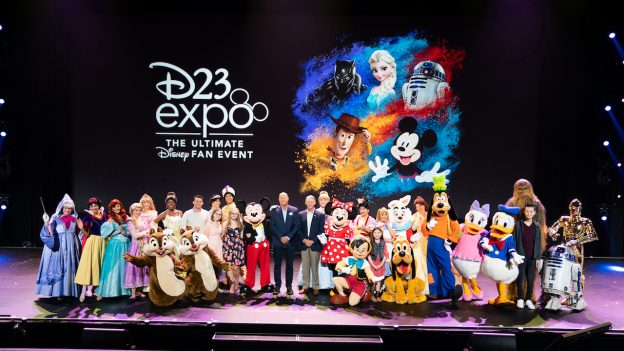 Exciting Announcements for Disney Parks, Resorts, Cruise Ships and Beyond at D23 Expo 2019

Today, we’re continuing our D23 Expo coverage in Anaheim with dozens of new announcements as well as updates from Thursday’s big news showcasing how we’re bringing the next generation of immersive storytelling to life at Disney parks and resorts across the globe.

Beginning at 10:30 a.m. PT / 1:30 p.m. ET, the Disney Parks Blog is hosting LIVE, minute-by-minute coverage as Disney Parks, Experiences and Products Chairman Bob Chapek unveils details for one of the most extraordinary periods of expansion in Disney history!

Keep refreshing this page for the latest updates as they are announced.

Thank you for watching our coverage of the Disney Parks, Experiences and Products presentation at D23 Expo.  Please scroll down to find all of today’s announcements and links to find more information.

And keep checking back during the week for the latest on stories shared today from Bob Chapek and more!

And for the Disney Wish, the signature stern character will be Rapunzel.

The Disney Wish is the name of the fifth Disney Cruise Line ship. Magic will be found throughout this new ship, including the three-story atrium that will be inspired by the beauty of an enchanted fairytale. The Disney Wish will be delivered in late 2021 and will set sail beginning in January 2022.

Disney Cruise Line guests can look forward to a signature island experience that celebrates the spirit and culture of The Bahamas and the natural environment at a new Disney port of call, which will be located on the breathtaking island of Eleuthera at a place called Lighthouse Point.

As we shared on Thursday, Star Wars: Galactic Starcruiser at Walt Disney World Resort will be a new, first-of-its-kind vacation experience where guests will check-in for a two-night adventure aboard a glamorous starship called the Halcyon.  Once onboard, guests will interact with characters and become active participants in stories that unfold around them on their galactic journey.

At Star Wars: Galactic Starcruiser, both children and adults will have the opportunity to face off against a training remote while wielding a lightsaber like Luke Skywalker did as he was learning to use The Force.

Planned to debut in late 2020, Disney Genie is a revolutionary new digital offering that will enhance the way guests plan for and experience a trip to Walt Disney World Resort.

Following the limited time run of Epcot Forever at Epcot, a new nighttime spectacular called “HarmonioUS” will be the largest ever created for a Disney park.  It will celebrate how the music of Disney inspires people the world over.

World Showcase at Epcot will also welcome the first attraction inspired by Mary Poppins in Cherry Tree Lane, which will join the United Kingdom pavilion as an entirely new neighborhood!

The France pavilion will offer even more for guests to discover, including a new “Beauty and the Beast Sing-Along” in January 2020.   And in summer 2020, the much-anticipated attraction Remy’s Ratatouille Adventure will open, as well as a delicious new restaurant called La Crêperie de Paris.

Also at World Showcase, the film “Canada Far and Wide in Circle-Vision 360” will debut in January 2020 in the Canada pavilion with new scenes and a new story.

In World Nature, The reinvention of Epcot will include Journey of Water, Inspired by “Moana.”  This first-ever experience inspired by the Walt Disney Animation Studios hit film will let guests interact with magical, living water in a beautiful and inspiring setting.

PLAY! pavilion at World Discovery is opening in time for the 50th Anniversary of Walt Disney World. In this interactive metropolis, guests will discover a city bursting with games, activities, and experiences that connect them with friends, family, and beloved Disney characters like never before.

Also at World Discovery in Epcot,  an expansion of the Mission: SPACE pavilion, the new restaurant Space 220, will open this winter as an out-of-this-world culinary experience with the celestial panorama of a space station, including daytime and nighttime views of Earth from 220 miles up.

Guardians of the Galaxy: Cosmic Rewind at Epcot will feature the first reverse launch into space! This thrilling, family-friendly attraction will feature a never-before-seen storytelling coaster that rotates to focus on the action – wherever it may be.

A new pavilion at World Celebration will be the home base for Epcot’s signature festivals, providing a stunning view of World Showcase and an ideal spot to witness the park’s nighttime spectacular. This three level structure will have one of the most remarkable designs at any Disney park and will fast become a new icon for Epcot.

The park will be unified with four neighborhoods that each celebrate a unique aspect of what makes Epcot so special. World Showcase will continue to celebrate culture, cuisine, architecture and traditions from around the world.  And where Future World currently stands, three new neighborhoods will spring up: World Nature, World Discovery and World Celebration. Find more details here.

As Super Heroes assemble at both campuses, one of the iconic buildings in California will be the Avengers Headquarters. The building will become the future entrance to a brand-new E-Ticket attraction where guests will fly alongside the Avengers in an epic adventure to Wakanda and beyond when it opens in the next phase of development. Read more here.

Bob Chapek announced the first Disney ride-through attraction to feature Spider-Man will open at the Avengers Campus, beginning in 2020 at Disney California Adventure and later at Disneyland Paris.

And for the first time, the Avengers Campuses will give guests a chance to meet Ant-Man and the Wasp – along with many of your favorite Super Heroes. Read our update here.

Target and Disney are coming together for a project that includes the launch of 25 Disney stores within select Target stores nationwide on October 4, with 40 additional locations opening by October 2020.

The “shop-in-shop” will feature an enhanced Disney assortment of more than 450 items, including more than 100 products that were previously only available at Disney retail locations.

And as part of the multi-year transformation of Hong Kong Disneyland, guests will be able to visit the world of “Frozen” and experience two incredible attractions.

The first is a new coaster called Wandering Oaken’s Sliding Sleighs where Olaf and Sven help pull your sled to the top of the lift before sending you on your way.

Also, we’re bringing Frozen Ever After – the popular attraction at Epcot – to Hong Kong.  Full story.

At Hong Kong Disneyland, we’re celebrating some of the greatest animated stories of all time as the castle transforms into the Castle of Magical Dreams. The castle will be unlike any other – drawing inspiration from 13 beloved Disney stories featuring princesses and heroines. It will also be a canvas for new entertainment, including a daytime show and nighttime spectacular and home to a new Bibbidi Bobbidi Boutique.

The “Zootopia”-themed land coming to Shanghai Disney Resort will feature new entertainment, merchandise and dining options that can only be found in the land along with a new major attraction that blends storytelling and state-of-the-art technology.

Here’s a new look at Mickey & Minnie’s Runaway Railway coming to Mickey’s Toontown in 2022!  This first major Mickey-themed ride-through attraction will put you inside the wacky and unpredictable world of a Mickey Mouse cartoon short where anything can happen.

The action takes place at the El CapiToon theater at Disneyland, where Mickey and Minnie are premiering their newest short, “Perfect Picnic.”Mickey & Minnie’s Runaway Railway is also planned to open at Disney’s Hollywood Studios in Walt Disney World Resort in spring 2020. Read the full story.

Just announced!  Coming this spring at Disneyland Resort – an all-new parade called Magic Happens. The parade will celebrate inspiring moments of magic at the heart of so many Disney stories, featuring stunning floats, beautiful costumes and beloved Disney characters from “Moana,” “Coco,” “Sleeping Beauty” and more – all led by Mickey Mouse and the gang.   Full story here.