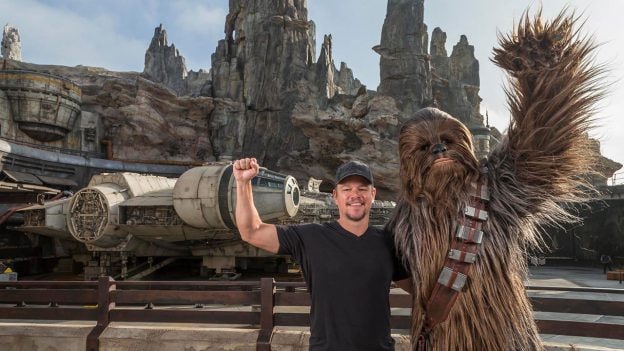 The force was strong with Matt Damon yesterday when he visited Star Wars: Galaxy’s Edge at Disneyland park for the first time!

Upon landing on the planet of Batuu in a galaxy far, far away, we caught up with Matt in front of the Millennium Falcon where snapped photos, selfies and wielded a lightsaber for a special moment with Chewbacca.

Matt, who was vacationing with family, was excited to take the controls of the fastest ship in the galaxy aboard Millennium Falcon: Smugglers Run during his visit.

Millennium Falcon: Smugglers Run is an anchor attraction inside the new Star Wars: Galaxy’s Edge, which opened May 31, 2019, at Disneyland park in California and will open Aug. 29, 2019, at Disney’s Hollywood Studios in Florida. It combines immersive storytelling with interactive gameplay to make guests the protagonists of their own Star Wars adventures in a way never before undertaken by Disney Parks.

Have you taken the controls of the fastest ship in the galaxy?