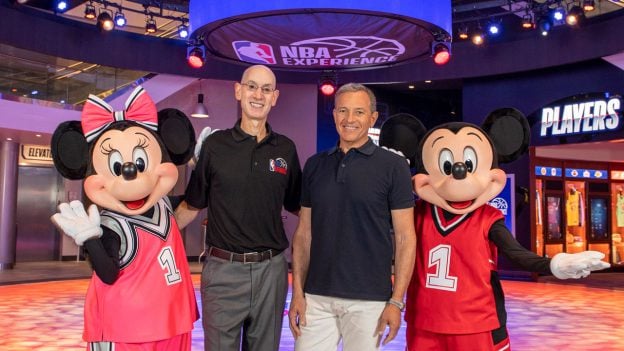 It was a championship-worthy celebration earlier today at Disney Springs for the grand opening of NBA Experience! Amid cheering fans and celebrity guests, Disney Chairman and CEO Bob Iger unveiled the first-of-its-kind destination, joined onstage by NBA Commissioner Adam Silver and several current and former NBA and WNBA players.

“NBA Experience lets everybody who loves the game, live it,” Bob said. “We’re excited to open the doors to a fun and unique experience for fans of all ages.”

“I want to thank Bob Iger and the Walt Disney Imagineering team for capturing the authentic NBA experience at this landmark destination at Disney Springs,” Adam said. “Disney creates memorable experiences better than anyone, and we are thrilled to share the excitement of NBA basketball with fans and Walt Disney World guests from around the world.”

In collaboration with the NBA, Walt Disney Imagineering developed NBA Experience as an immersive, interactive venue. The high-energy environment is packed with 13 different basketball-related activities across 44,000 square feet and two floors. Here, guests can experience what it’s like to be selected in the NBA Draft and step onto the court to make clutch shots and highlight-worthy slam dunks. NBA Experience also provides ample opportunities to learn more about the NBA and WNBA via interactive displays, films and trivia. The unique destination offers something for guests of all ages. To watch a replay of the grand opening ceremony, visit this previous blog post.