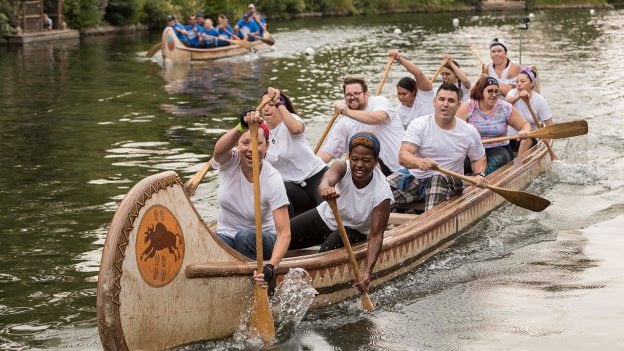 For 54 years, at dawn’s first light, Disney cast members, Imagineers and employees have gathered at the Rivers of America in Disneyland park to compete for the championship in the time-honored and summertime tradition of the canoe races.

It’s serious business. Starting with 86 teams at the beginning of the race season, teams have been practicing and competing in time trials to get down to the final 24 teams rowing in sprint finals, and timed team finals Aug. 6 and 7.

Sprints winners, You’re Welcome, comprised mostly of cast members who worked on the rerouting of the river from two years ago, preparing for the expansion of Star Wars: Galaxy’s Edge. Team Captain Kateri Ninh, former Davy Crockett’s Explorer Canoes cast member and current Program Development project manager, said, “It’s a great team-building activity and a unique opportunity to meet people from all across the company. Where else can you do this?”

The Oarlords, winner of the team timed finals in the Endor division and overall finals champions, agreed. “It’s the highlight of my summer,” said Team Captain Ricky Corriero. “Nowhere [else] does this. To say that you can do this and it’s been going on for more than 50 years, that’s really cool!”

As part of the final festivities, Disneyland Resort made a $2,500 donation to Anaheim Beautiful, a nonprofit dedicated to preserving and enhancing the beauty of Anaheim.

Take a look at the video covering all the finals glory: