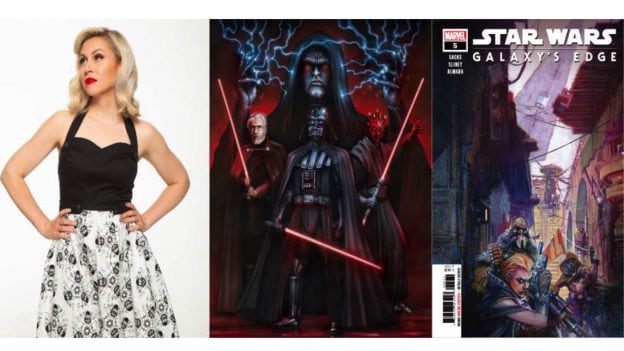 In just weeks, you’ll be living your own Star Wars story at Star Wars: Galaxy’s Edge at Disney’s Hollywood Studios.  And to prepare for the historic grand opening on August, 29, there are several exciting merchandise events coming to the park that we thought you’d like to check out!

Meet Ashley Eckstein from Her Universe!

On August 17, Ashley Eckstein will be showcasing her newest dress featuring Darth Vader from the Her Universe fashion company at Launch Bay Cargo at Disney’s Hollywood Studios.

Known to Star Wars fans as the voice of Ahsoka Tano on Star Wars: The Clone Wars and Star Wars Rebels, actress and entrepreneur, Ashley Eckstein, also founded Her Universe – the groundbreaking fangirl fashion company and lifestyle brand.  Ashley has been widely recognized as a business woman and trendsetter.

At the event, wristbands will be required, and will be distributed to guests at park open on the day of the signing at the event location with the purchase of a Her Universe or Ahsoka Tano item. *

Artists from diverse backgrounds are coming together at Launch Bay Cargo to showcase special artwork inspired by the Star Wars saga!  Artists Craig Fraser, Kevin-John, William Silvers, and Charles Wissig will be available to meet guests and sign art for your collection.** Whether you’re a fan of the light side or the dark side, you are sure to love these great new pieces.   Fraser says he channeled his inner dark side while the work of Silvers drew inspiration from Yoda.

This series of special merchandise events at Disney’s Hollywood Studios begins on August 17.  Let us know what you’re looking forward to in the comments.

Merchandise available while supplies last. We ask that only two (2) items be signed per guest, per time in line. We ask that you bring no personal items to be signed.  Valid Walt Disney World Resort receipt may be required. Event is subject to space and time availability and is not guaranteed. Theme park admission is required. Event information subject to change without notice.

*Wristbands will be distributed to guests at park open on the day of the signing at the event location with the purchase of a Her Universe or Ahsoka Tano item. A wristband from the appearance location is required to meet Ashley Eckstein and allows the guest to get two items signed. A limited number of wristbands will be available.  Once the wristbands have been distributed, the line to meet Ashley Eckstein will close.

**Guests must purchase product before having it signed.