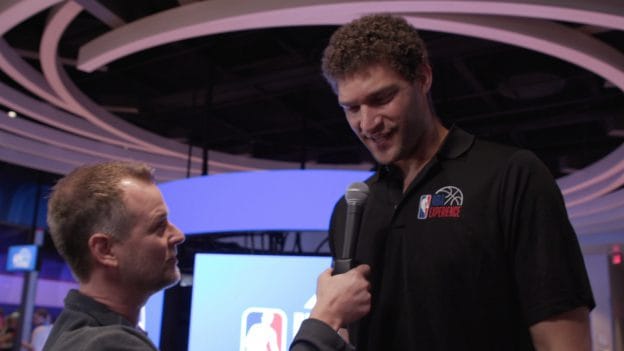 Visiting with the Tallest Disney Fan I Know

While naming anyone the world’s “biggest” Disney fan would ignite the kind of debate we prefer to avoid around the Disney Files newsroom, I’m pretty comfortable saying that twin brothers and NBA stars Brook and Robin Lopez are among the tallest.

I first met Brook through a mutual friend – Disney Legend, Imagineer and Disney Vacation Club Member Cruise veteran Tony Baxter – who, like me, was surprised not only by these pro athletes’ Disney fandom, but also by their Disney knowledge. Visiting with a Lopez brother feels a lot like visiting with a Disney Archivist…though your neck doesn’t tend to hurt from looking up at an archivist.

So when Disney Springs opened its new NBA Experience attraction earlier this month, it was no surprise that Brook Lopez (who will soon begin play with Team USA in the World Cup of Basketball) was among the players assembled to unveil an attraction that combines his two greatest passions: the NBA and Disney.

I caught up with Brook inside the sprawling attraction after its star-studded dedication ceremony, and I’m pleased to share highlights of our visit in the latest video addition to Disney Files On Demand. (Note to self: the next time I film with an NBA center, bring a ladder.) Look for this and more Disney newsmaker interview videos online at disneyvacationclub.com/disneyfiles.

Likes (0)
Share Visiting with the Tallest Disney Fan I Know