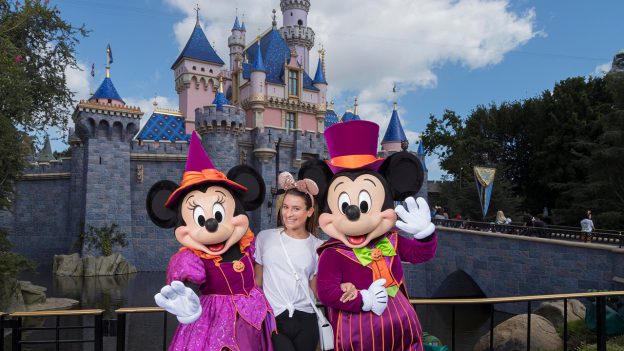 Actress-singer Lea Michele can’t get enough of the Disneyland Resort – that’s what she shared as she celebrated Halloween with her family during her visit over the weekend.

After landing from a flight on Soarin’ Around the World at Disney California Adventure park, she made her way across to Disneyland to meet Minnie Mouse and Mickey Mouse in their Halloween finest. She was just getting her day started at the Happiest Place on Earth during the spookiest time of year! Halloween Time brings the spooky season to life with happy hauntings at both Disneyland park and Disney California Adventure park, now through October 31, 2019.

Speaking of seasonal celebrations, when she’s not enjoying time with her family, Lea is gearing up for the launch of her first-ever Christmas album, “Christmas in The City,” recorded with some of our favorite Glee stars. The album drops just before ABC’s upcoming Christmas movie, “Same Time, Next Christmas,” in which Lea Michele stars as Olivia Henderson, a woman who met her childhood sweetheart during her family’s annual Christmas visit to Hawaii. After being separated by distance and years, the two reunite at the same Hawaii resort years later and the old chemistry between them flares up anew — but circumstances conspire to keep them apart. You’ll have to tune in to learn more!

How’s that for some awesome treats?