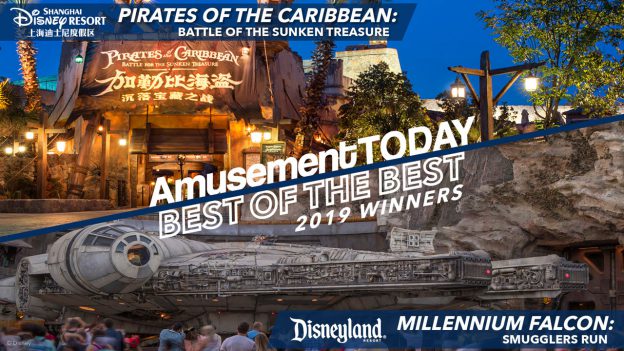 We’re excited to announce that two Disney Parks attractions have been named winners of Amusement Today’s annual Golden Ticket Awards. Millennium Falcon: Smugglers Run at Disneyland Resort won Best New Family Attraction of 2019, and Pirates of the Caribbean: Battle for the Sunken Treasure at Shanghai Disney Resort won Best Dark Ride of 2019. These annual awards recognize the “Best of the Best” in the amusement park industry through an international poll.

Since opening our largest single-themed land in Disney parks’ history at Disneyland Resort on May 31 and at Walt Disney World on Aug. 29, Millennium Falcon: Smuggler’s Run has quickly become a guest favorite thanks to it’s immersive and technologically-advanced experience. Whether you’re a pilot, gunner or engineer, you and your flight crew can embark on an action-packed mission flying the fastest hunk of junk in the galaxy – already one of the Disneyland Resort’s top-rated attractions recently named one of TIME Magazine’s “World’s Greatest Places.”

Since 2016, Pirates of the Caribbean: Battle for the Sunken Treasure has taken guests on an exciting ride at Shanghai Disney Resort. The immersive attraction, based on the popular Pirates of the Caribbean film franchise, takes guests on an above an undersea adventure where paths are crossed with pirates including Captain Jack Sparrow and mermaids. A highly advanced propulsion system and dimensional set pieces combine large-scale media screens, Audio-Animatronics figures and special effects to create an exhilarating experience – leading to previous award wins like the Visual Effects Society Award for outstanding visual effects and the Themed Entertainment Association Thea Award for Outstanding Achievement.

Whether you’re living your own Star Wars adventure on Millennium Falcon: Smuggler’s Run or navigating the sea aboard Pirates of the Caribbean: Battle for the Sunken Treasure, you’re in for an immersive experience that blurs reality and fantasy. Stay tuned for the exciting opening of Star Wars: Rise of the Resistance at Walt Disney World Resort later this year and at Disneyland Resort early next year!