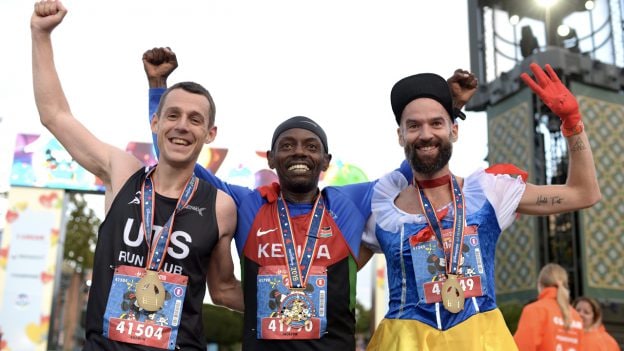 Disneyland Paris Run Weekend is a Grand Adventure for All!

The Disneyland Paris Run Weekend returned for its fourth year this past weekend (Sept. 19-22) with nearly 27,000 participants coming out to pursue running adventures of all kinds.

The weekend kicked off with a roar as runners, some dressed like Simba from The Lion King as well as other beloved Disney animal characters, took part in a nighttime 5K run through Walt Disney Studios Park on Friday.

On Saturday, runners chased their dreams like the Disney Princesses in the Disneyland Paris 10K, running through the two Disney Parks and earning a unique finisher medal featuring the courageous Rapunzel and her chameleon Pascal. In addition, Saturday’s Neverland-themed runDisney Kids Races awarded the young participants with medals featuring the adventurous Peter Pan and friends.

Because love is the greatest adventure of all, the Disneyland Paris – Val d’Europe Half Marathon on Sunday celebrated Disney’s beloved character couples. Participants ran through both Disney Parks and their neighboring countryside and villages, then took home a medal featuring the most iconic Disney couple, Mickey and Minnie Mouse.

Some runners took their adventures to new heights by running multiple races over the weekend and completing the 31K or 36K Challenges and earning Aladdin-themed medals. A special Sleeping Beauty Castle medal awaited runners who completed the Castle to Chateau Challenge, including the Disneyland Paris – Val d’Europe Half Marathon and a runDisney Marathon or Half Marathon at Walt Disney World Resort in 2019.

If you embarked on any of these 2019 Disneyland Paris Run Weekend adventures, be sure to share your experiences with us using #runDisneyFrance and #DisneylandParis Half.

Likes (4)
Share Disneyland Paris Run Weekend is a Grand Adventure for All!