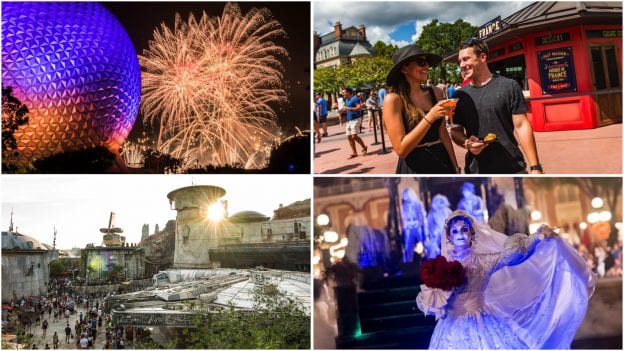 Fall Food, Fun & Frights Are On at the Walt Disney World Resort

Fall is one of my favorite times of year to visit the Walt Disney World Resort. There’s simply so much fun to be had right now: my son and I simply adore Mickey’s Not-So-Scary Halloween Party, my foodie husband loves the Epcot International Food & Wine Festival, and we can’t wait to take our whole family to Star Wars: Galaxy’s Edge at Disney’s Hollywood Studios for the first time!

Here are some of my top recommendations for making the most of your visit this fall:

Indulge in spooky thrills at Mickey’s Not-So-Scary Halloween Party – Mickey’s Not-So-Scary Halloween Party is already delighting guests with the “treat” of a new fireworks show this year – “Disney’s Not So Spooky Spectacular.” Other must-sees at the event are the “Hocus Pocus Villain Spelltacular” stage show and “Mickey’s Boo-To-You Halloween Parade,” which features Disney characters in new Halloween costumes – and the spectral bride from the Haunted Mansion (get your smartphone cameras ready!). Don’t miss out! Grab tickets early here.

Indulge your taste buds at the Epcot International Food & Wine Festival – Where else but at the Epcot International Food & Wine Festival can you sample mouthwatering international fare at more than 30 Global Marketplaces, watch live culinary demonstrations, and learn tips and tricks from celebrity chefs? Eat to the Beat concerts also keep the fun going in the evening, bringing the sounds of pop, rock, R&B, country, Christian, swing and Latin artists to the America Gardens Theatre, three times nightly.

Make out-of-this-world memories at Star Wars: Galaxy’s Edge – Guests can now become part of their own Star Wars story at Star Wars: Galaxy’s Edge at Disney’s Hollywood Studios, where they can try galactic food and beverages, craft their own lightsabers, build droids and even help fly the “fastest hunk of junk in the galaxy” at Millennium Falcon: Smugglers Run. (Also, now through September 30, guests can interact with an exclusive Snapchat filter that’ll put you inside a realistic hologram – available in certain U.S. regions only – start your transmission from the planet of Batuu today).

Dive into a Disney water park – Now is the perfect time to jump the waves in the Surf Pool at Disney’s Typhoon Lagoon water park.

What’s your favorite fall activity at the Walt Disney World Resort? Tell us in the comments section below!