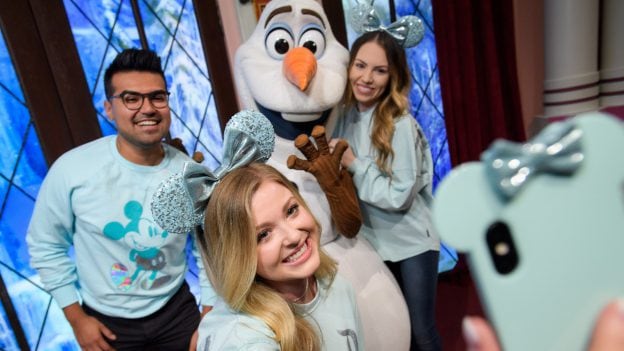 ‘Frozen’-Inspired Color Collection, Arendelle Aqua Debuts Around the World at Disney Parks and Online at shopDisney

Calling all “Frozen” fans! We’re melting with excitement for today’s debut of Arendelle Aqua, the latest color collection to hit Disney Parks around the world and online at shopDisney.com!

The entire fashion collection features a sparkling icy blue hue in a variety of items from headwear and accessories to men and women’s apparel coming over the next few months. Check out a quick look at the collection from our friends at Disney Style and a peek at tasty treats and sweet sips from Disneyland Resort and Walt Disney World Resort:

Throughout Walt Disney World Resort, Arendelle Aqua is spiraling in frozen fractals all around with over 20 items from accessories and apparel to food and beverage. Highlights include Arendelle Aqua “Frozen” Lemonade at Epcot as well as Arendelle Aqua Sugar Drop Donuts at Disney’s Pop Century Resort!

For the first time ever overseas at Shanghai Disney Resort, the Minnie Mouse ear headband will be available with over 7 different items from the collection coming over the next several months for guests to wear to the popular “Frozen: A Sing-Along Celebration” as seen above!

Hop on over to Hong Kong Disneyland for an assortment of Arendelle Aqua items including the Minnie ear headband with more rolling out over the next few months!

Unable to make it to Disney parks or want to prep your style in advance? You’re in luck! More than 15 items from the collection – including an Arendelle Aqua Alex and Ani bracelet and Loungefly crossbody bag along with an assortment of items from both Walt Disney World Resort and Disneyland Resort – are available on shopDisney.com.

Prepare to let it go and get your Arendelle Aqua on at Disney parks around the world and don’t forget to use #ArendelleAqua when sharing your “Frozen”-inspired styles!