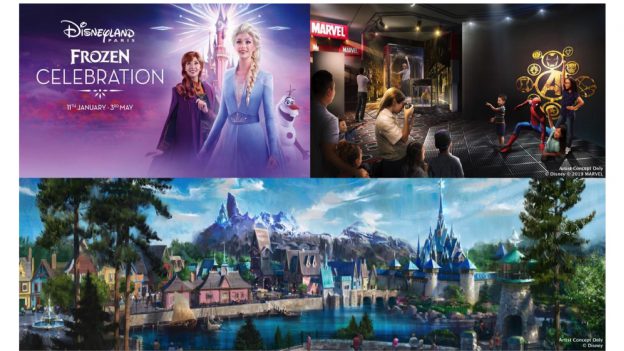 New Experiences Coming to Disneyland Paris in 2020 and Beyond

Earlier this morning at the very first Disneyland Paris Media Expo, we announced immersive, one-of-a-kind seasonal events and exciting new offerings coming to Disneyland Paris in 2020 and beyond.

From an engaging new Frozen Celebration early next year to the opening of Disney’s Hotel New York – The Art of Marvel next summer, you won’t want to miss these new experiences for guests of all ages!

Marvel fans, prepare to assemble! From a new hotel transformation celebrating iconic Marvel art to being immersed in the action throughout the parks, guests are invited to step into the Marvel Universe to live out their Super Hero stories like never before:

Guests will soon be able to experience Disney’s Hotel New York – The Art of Marvel, celebrating 80 years of Marvel storytelling in a typical New York setting, with a contemporary Art Deco style. The hotel is inspired by a New York art gallery, paying tribute to the city that is home to many iconic Marvel Super Heroes and the artists who created them.

When the hotel reopens next summer, it will be the very first hotel dedicated entirely to the celebration of Marvel art, inviting guests to discover the iconic stories and characters of this epic universe with one of the largest publicly viewable collections of Marvel artwork in the world.

Disney’s Hotel New York – The Art of Marvel will also be the very first Disney hotel where guests can have heroic encounters with iconic Marvel Super Heroes in a special location called Super Hero Station.

Guests can book their stay at Disney’s Hotel New York – The Art of Marvel beginning Nov. 5, 2019 for its opening in summer 2020!

Following the success of the first two events, Marvel Super Heroes will return to Walt Disney Studios Park to give guests a thrilling experience next spring. The Marvel Universe will come to life with epic shows and experiences featuring Spider-Man, Iron Man, Captain America, Captain Marvel and more guest favorites.

As recently announced, Walt Disney Studios Park will be home to a new Marvel-themed area called Avengers Campus, part of a multi-year expansion for the park that will also include “Frozen” and Star Wars-themed areas, opening in phases starting in 2021.  Avengers Campus will immerse guests in action-packed adventures with incredible attractions, heroic encounters and new restaurants as seen in this new concept art above!

One of the most popular Disney stories is coming to life at Disneyland Paris, and guests will soon be able to experience even more adventures with Anna, Elsa, Olaf and other “Frozen” friends.

From Jan. 11 to May 3, 2020, Disneyland Paris will introduce an enchanting new family journey with a brand-new event: Frozen Celebration.

The festivities will include a dazzling new show four times a day on the parade route starring Anna, Elsa, Kristoff, Olaf and Sven with incredible dancers and acrobats along with an enchanting new float! Characters from Arendelle will also take part in the Disney Stars on Parade with a “Frozen”-inspired float. During the evenings, the magical adventures of Anna and Elsa will come to life during Disney Illuminations.

To top it off, guests indulge in exclusive treats and drinks and shop a wide range of souvenirs celebrating the adventures of Anna, Elsa and their friends.

A brand-new interactive adventure will open its doors at the Animation Celebration in Walt Disney Studios Park entitled: Frozen: A Musical Invitation. Guests will be transported to the kingdom of Arendelle, where they will play and interact with their favorite characters over several stages and meet the friendliest snowman, Olaf.

The “Frozen” frenzy continues in the coming years with a new themed area dedicated to this beloved story, which is part of the multi-year expansion of the Walt Disney Studios Park. As part of the fully immersive land and seen in the new concept art above, guests will see the snow-capped mountain of Arendelle in the distance opposite a magnificent lake, with an attraction that will take them to the center of the kingdom. The area will also include character encounters, a new restaurant and a shop securing a permanent presence of this beloved franchise at Disneyland Paris.

The coming months also mark the return of:

As you can tell, Disneyland Paris is THE place to be over the next year with much more to come! Stay tuned to the Disney Parks Blog for the latest and let us know in the comments which exciting new addition you’re anticipating most.