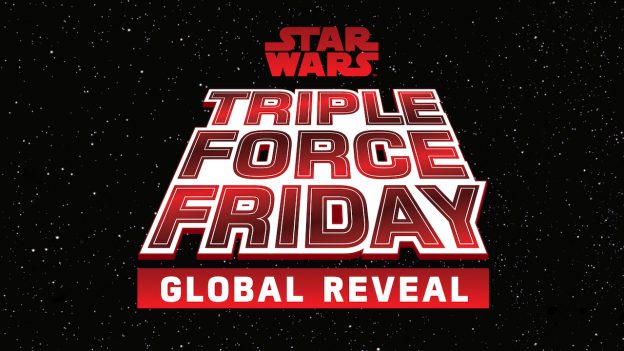 Calling all Star Wars fans! Join us here on the Disney Parks Blog this Thursday, Sept. 26 as generations of Star Wars talent come together for a global livestream where we’ll be revealing new products inspired by “Star Wars: The Rise of Skywalker,” “The Mandalorian” and “Star Wars Jedi: Fallen Order” for the very first time. The event will kick off a weeklong countdown to Triple Force Friday when new products inspired by these Star Wars stories will hit shelves worldwide, including a variety of Disney Parks exclusive items.

On Sept. 26 at 2 p.m. ET / 11 a.m. PT, fans around the world can tune in to the event from Pinewood Studios in London where the upcoming theatrical release “Star Wars: The Rise of Skywalker” was filmed. Via live and recorded vignettes, an ensemble of veteran and new Star Wars talent will reveal new products that will roll out around the world on Triple Force Friday, Oct. 4.

Star Wars talent participating in the global reveal will include fan favorites such as Daisy Ridley, John Boyega, Oscar Isaac, Anthony Daniels, Billy Dee Williams, Pedro Pascal, Cameron Monaghan and more! Livestream viewers also will be treated to the worldwide premiere of a new trailer for “Star Wars Jedi: Fallen Order,” along with other special surprises from across the Star Wars galaxy.

In addition to seeing new characters in product form for the first time, fans will get their first look at the wide array of new products that bring the characters to life in new and unexpected ways, spanning toys, apparel and accessories, books, gaming, tech and even home goods!

You can join in the conversation on social using Triple #ForceFriday and at in-store retail celebrations around the globe when products set on Oct. 4. Fans in Orlando and Anaheim will be able to experience Oct. 4 midnight shopping at World of Disney at Disney Springs and Downtown Disney. Disney Springs will also feature midnight shopping at the LEGO® Store, along with Star Wars-themed food and beverage offerings and a LEGO Star Wars Millennium Falcon Master Build Event.

For more information and updates about Triple Force Friday stay tuned to the Disney Parks Blog and visit StarWars.com.