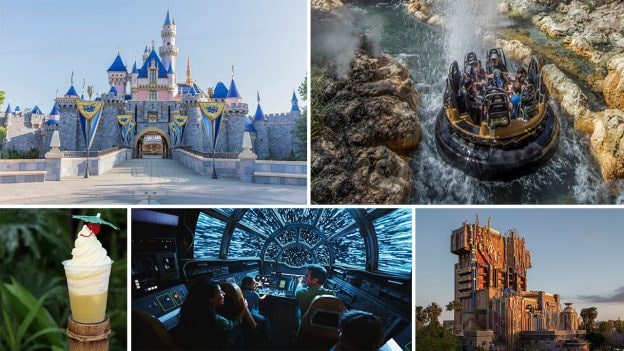 Staying Cool When the Sun Shines Bright at the Disneyland Resort

Right now there are so many new things to see and do at the Disneyland Resort, that it’s a great time to visit! As the Southern California sun shines bright, here are some ways to keep cool during your stay:

First up is Disneyland park!

Break away from the bright sun in a galaxy far, far away at Star Wars: Galaxy’s Edge. Within the planet of Batuu, you’ll find many cool places!

In Millennium Falcon: Smuggler’s Run, you can start cooling off in the cavernous path to the Main Hold of the Millennium Falcon. Once you reach this famous space, you can hang out around the Dejarik (chess) table for a few minutes before taking the controls of the fastest ship in the galaxy toward adventure and, ah, yes, a galactic breeze.

As you roam Batuu, head over to the Milk Stand to enjoy a refreshing Blue Milk and Green Milk – these frozen concoctions are sure to cool you down.

For crafty libations, we recommend Oga’s Cantina. This watering hole is where weary travelers of all ages can join together to refuel after a long day of adventuring. Hang out with DJ R-3X and sip on one of the many out-of-this-world non-alcoholic or alcoholic beverages. Just be sure to make a reservation to visit the cantina before you go!

Around Disneyland park, guests can stay cool at guest-favorite attractions like Splash Mountain, Matterhorn Bobsleds, Haunted Mansion, Peter Pan’s Flight and many others.

And of course, chill out with a Dole Whip Float from Tiki Juice Bar or The Tropical Hideaway, a Mint Julep in New Orleans Square or a delicious old-fashioned ice cream at Gibson Girl Ice Cream Parlor.

Next, is Disney California Adventure park!

Head to Hollywood Land and experience the newly opened 3D movie musical “Mickey’s PhilharMagic” in the Sunset Showcase Theater. In the show, Donald stirs up some musical mayhem while you get swept into the fantastic world of classic Disney animated musical sequences, including “Beauty and the Beast,” “The Little Mermaid,” “Peter Pan” and “Aladdin.” Fun fact: Some scenes are super breezy!

You can also take refreshing flight on Soarin’ Around the World, get lightly drizzled or even soaked on Grizzly River Run, go on a journey with The Little Mermaid ~ Ariel’s Undersea Adventure, join a thrilling mission with Guardians of the Galaxy – Mission: BREAKOUT!, test your illustration skills in Animation Academy or take a break as you’re transported to Arendelle during the theatrical performance, “Frozen – Live at the Hyperion” in Hollywood Land.

How do you stay cool in the parks?

For more on the “coolest” tips and latest offerings you can find at the Disneyland Resort, check out the links below!