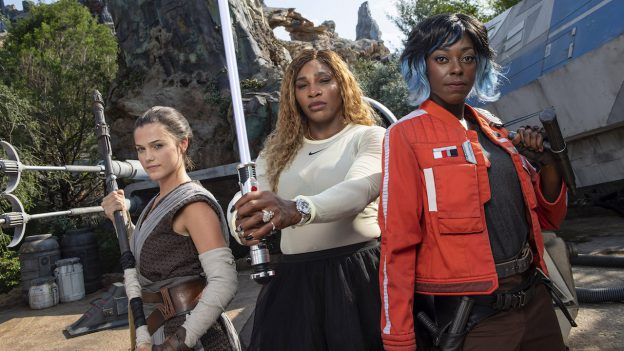 Last week, tennis star Serena Williams lent some of her star power to the Resistance at Star Wars: Galaxy’s Edge at Walt Disney World Resort. The winner of 23 major singles titles met two of our favorite rebels, Rey and Vi Moradi, on Batuu, where they taught each other a thing or two about battling some fierce competition.

Williams snapped a few photos before piloting the “fastest hunk of junk in the galaxy” in Millennium Falcon: Smugglers Run. “That was wild,” she said after experiencing the attraction inside Star Wars: Galaxy’s Edge. “It was so fun – I felt like I was really flying.”

The out-of-this-world trip to Star Wars: Galaxy’s Edge at Disney’s Hollywood Studios was part of a Walt Disney World vacation Williams took with family and friends. She was especially excited to share the magic of Disney with her 2-year-old daughter, Olympia, for the first time.

“Being a crazy Disney World fan, I’ve literally been waiting on this moment since I was pregnant,” said Williams. “This is like a dream come true … I feel like [Olympia] already loves it.”