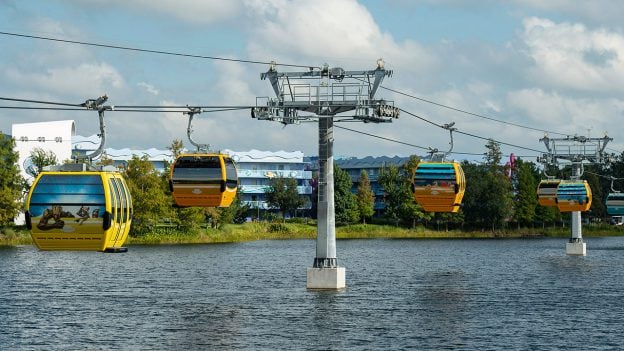 There’s Magic in the Air with New Disney Skyliner

We’re primed for take-off, as Walt Disney World Resort is about to glide into a new transportation era.

When Disney Skyliner takes flight, Sept. 29, 2019, guests aboard this complimentary transportation system will see one-of-a-kind views of woodlands, waterways and Disney’s Hollywood Studios and Epcot – with familiar Disney pals appearing to be along for the ride.

Check out the video below for a first look at stunning vistas seen along the Disney Skyliner routes.

To go along with five artful loading stations along the line, each cabin will be stylish in one of eight vibrant colors and feature sleek curved lines. Many of the nearly 300 cabins will feature graphics based on Disney films, attractions and characters – giving the sensation that Mickey Mouse and Minnie Mouse, Pluto and Goofy, Chip ’n Dale, the Pirates of the Caribbean and many others have joined the fun.

Each Disney Skyliner cabin can accommodate up to 10 guests, including those traveling with wheelchairs or assistive devices. With the system in constant motion, guests will arrive at their destination in minutes; and they’ll arrive relaxed – in the comfort of cabins mindfully tailored for the Florida climate.

In addition to convenient theme park access, guests staying at Disney Skyliner resorts will have quick-and-easy transportation to a world of other dining and entertainment options. These include all the fun of Disney’s BoardWalk entertainment district, access to Epcot through the International Gateway station, and restaurants and recreation found at the multiple resort hotels serviced by Disney Skyliner.