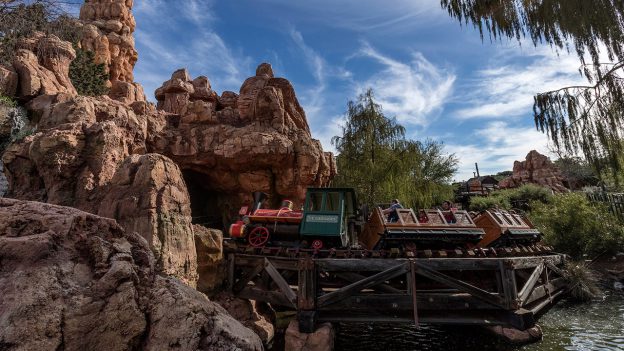 Howdy, partners! Big Thunder Mountain Railroad is celebrating its 40th anniversary today as one of the staple attractions here in Frontierland at Disneyland park! On September 2, 1979, Rainbow Ridge miners struck gold and opened the mine shafts to this classic American Southwest-inspired attraction. To celebrate this dynamite occasion, let’s take you through the fantastic history behind the wildest ride in the wilderness.

From 1956 to 1959, the Rainbow Caverns Mine Train attraction was a train tour through the Old West. Later, this attraction became Mine Train Through Nature’s Wonderland (pictured above) from 1960 to 1977. Although Walt did not conceive the high-speed attraction we know of today, his love for the American Southwest is what helped Disney Imagineers create the pioneering vision towards Big Thunder Mountain Railroad. To pay homage to Walt’s original Old West vision, some of the set pieces from the original western mining town of Rainbow Ridge were retained for Big Thunder Mountain Railroad!

The atmosphere and attention to detail is what has made this attraction such a fan-favorite for forty years. With Walt’s fascination of the Old West in mind, Big Thunder Mountain Railroad was imagined by Imagineer and Disney Legend Tony Baxter, who was inspired by the scenery at Bryce Canyon National Park in Utah. The unique shapes of the rocks were key to the landscape vision that expressed the feeling of the American national park. The “hoodoos,” or the famous spires in the attraction, create the scenery that brings guests back to the time of the wild frontier of the 1880s.

The mountain itself was completely manufactured using cement and paint to create realistic-looking rocks. From each carefully constructed rock formation and cavern, every scenic twist and turn in the “lost mines” takes you through different natural scenes all while providing thrilling drops, suspenseful inclines and a superstitious story line.

The mountains, caverns, trains and the animal inhabitants have their own unique personalities, which lends to the supernatural myths that surround the town of Rainbow Ridge. Legend has it that after gold was discovered in the 1860s, mysterious happenings started to occur once the large “boom” of gold rush miners turned to greed, including trains that operate on their own! Many say these ghostly tales went a long way in keeping the area uninhabited for such a long time.

Today, in the late 1880s, the Big Thunder Mountain Mining Company is still in operation, but its once glorious past is shrouded by the mystery behind the caves. Thus, the town of Rainbow Ridge’s population has decreased significantly from 2,015 people to just 38 people and is now considered a “ghost” town.

Here are some more fun facts about this wild ride:

So, whether you’re a prospector, cowboy or miner, make your way to the Disneyland Resort and celebrate 40 years of Big Thunder Mountain Railroad!