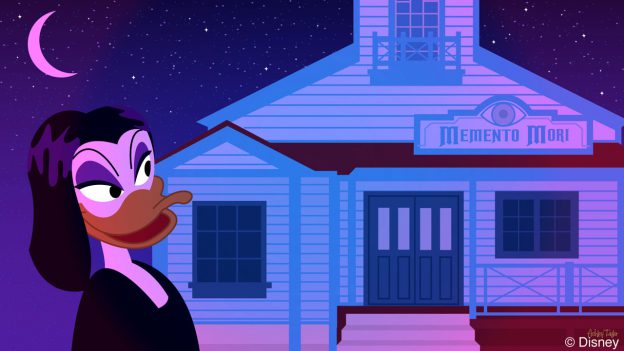 October is here and the countdown to Halloween is on! In honor of the month’s thrilling, chilling holiday, our Disney Doodles series is making a switch – a witch switch – to showcase the best spell-casting, plan-spoiling witch and sorcerer characters that Disney films have served up over the years.

Starting off our spooky series is Magica De Spell, the meddling witch you may remember from “Ducktales,” who was always trying to get a hold of Scrooge McDuck’s lucky Number One Dime, certain that it would make the ideal lucky charm.

According to Ashley Taylor, if Magica could visit a Disney Park, she’d likely choose Magic Kingdom Park, where she’d head to Memento Mori for some magical guidance on how to obtain that Number One Dime.

“Magica is always looking to cast spells on Scrooge McDuck in order to obtain his number one dime!” Ashley said. “I’d imagine she’d be inspired to shop around Madame Leota’s former abode at Memento Mori.”