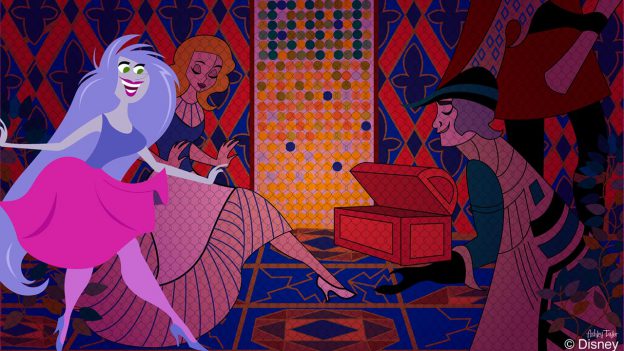 Our wicked countdown to Halloween continues today with another Disney Doodle inspired by one of Disney’s best spell-casting, plan-spoiling witch characters from Disney film history.

In the 1963 animated feature film, “The Sword in the Stone,” Madam Mim presents herself as Merlin’s nemesis, who even shape-shifts into different animals during a duel with him!

According to artist Ashley Taylor, if Madam Mim had the chance to visit a Disney Park, she’d likely head to Fantasyland at Magic Kingdom Park for some more shape-shifting!

“I love when Madam Mim turns herself into various creatures,” Ashley said. “It’s easy to imagine her turning herself into a beautiful maiden in the lovely mosaic at Cinderella Castle breezeway.”