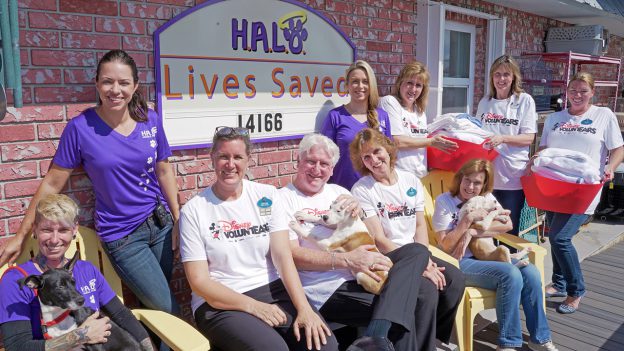 With the arrival of 83 dogs and one very special cat rescued from The Bahamas after Hurricane Dorian, H.A.L.O No-Kill Rescue animal shelter in Sebastian, Florida, was in desperate need for linens. Disney’s Vero Beach Resort, a Disney Vacation Club property, and Walt Disney World Textile Services answered the call for help and donated 600 pieces of linen – a combination of blankets, sheets and towels.

A group of Disney VoluntEARS from Disney’s Vero Beach Resort, including the resort’s General Manager Paul Hart, delivered the linens to the nearby shelter and gave some much-needed TLC to the “potcakes,” a mixed-breed found in The Bahamas. Who could resist those lovable faces?

After Hurricane Dorian moved off the island, the Humane Society of Grand Bahama was left with no food or medical supplies to care for the animals. Together with H.A.L.O., they quickly formed a plan to rescue 83 dogs and bring them to Florida.

H.A.L.O.’s Director of Development Allyson Bootes told us that she was ecstatic to learn that Disney was able to help. “We are so appreciative of the linen donation and the help we received from the Cast Members down the road at Disney’s Vero Beach Resort,” said Bootes.  “We were in a critical period of need after the hurricane, and this support could not have come at a better time!”

The donation of linens was critical to the shelter’s ability to care properly for the dogs since all of the bedding used during the 14-day quarantine period had to be disposed to prevent the spread of disease.

This is one of many ways Disney is continuing to help those impacted by Hurricane Dorian. The Walt Disney Company, led by Disney Cruise Line, committed $1 million to non-profit relief agencies to help hurricane relief and recovery efforts in The Bahamas. The company also has donated food, water, medical supplies, cleaning supplies, generators and construction materials, which the Disney Dream and Disney Fantasy have delivered to points in Nassau and the Abacos and others have helped deliver in Grand Bahama for those most affected by the hurricane. In addition, Disney Cruise Line is supporting its Bahamian-based Crew Members who live in impacted areas. So far, Disney has provided an additional $500,000 in supplies for these communities and direct aid to employees.