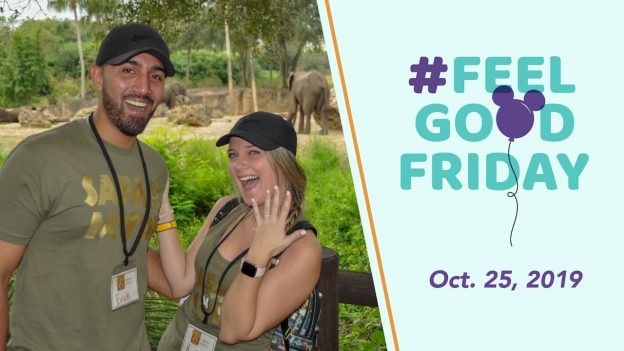 #FeelGoodFriday: A Magical Proposal on the Savanna at Disney’s Animal Kingdom

I love a good love story, and for this #FeelGoodFriday, I’m happy to share a magical one. Last Friday, the Caring for Giants tour at Disney’s Animal Kingdom was the perfect setting for a proposal involving an adventure-loving Walt Disney World annual passholder couple. Surrounded by African elephants and a few helpful cast members, Erick Gomez asked his girlfriend, Kayla Fernandes, to marry him. With much joy, she said yes!

This moment was more than a decade in the making – the couple first met each other in an 8th grade English class and quickly became friends. Friendship eventually turned into love, and the couple started dating and bought annual passes to explore Disney together. Now, Erick and Kayla are ready to take their relationship to the next level.

“Kayla loves Animal Kingdom, especially the elephants, and I wanted to do something unique,” Erick said. “So, I found the Caring for Giants tour, and I knew that would be the perfect spot.”

Caring for Giants offers guests a closer, more intimate look at the majestic African elephants at Disney’s Animal Kingdom and an opportunity to learn what it takes to care for them.

Erick was a little nervous about pulling off the surprise, but when he mentioned his plans to cast members Patrick and Maddie at the tour check-in desk, they were happy to help make everything go smoothly.

Maddie, who normally captures photos on Wild Africa Trek was eager to tag along with the group and help capture photos of the proposal. Meanwhile, Patrick leapt into action to work with nearby Merchandise and Food & Beverage cast members to pick out a few elephant-themed surprises, celebration buttons and a congratulations card from the team, and the elephants!

“I was so honored to be the one to capture such a special moment for Erick and Kayla,” Maddie said. “Seeing Kayla’s reaction as he asked, and her excitement to tell her family was so sweet.”

For Patrick, the moment was a great reminder of what he loves most about being a cast member.

“I’ll never forget the joy on their faces when they walked back onstage after the tour,” he said. “Knowing that our team helped create a memory they’ll have forever is easily one of my favorite parts of this job. Adventure is out there, and I hope they never stop looking for it together!”

Likes (33)
Share #FeelGoodFriday: A Magical Proposal on the Savanna at Disney’s Animal Kingdom