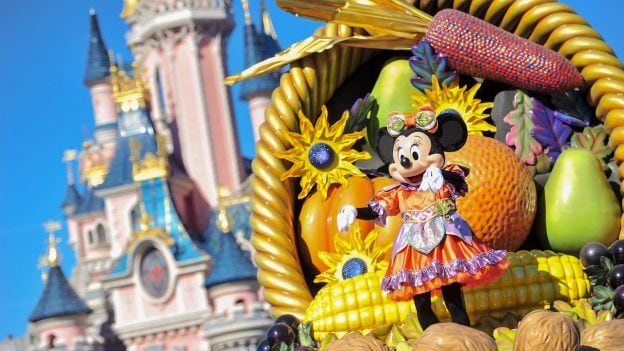 Halloween is a Frightful Good Time at Disneyland Paris

This Halloween season brings even more thrills, chills and surprises to Disneyland Paris, from now to November 3!

Stepping through the gates, guests will find a bewitched Main Street, U.S.A. and a mischievous atmosphere as the spirit of Halloween takes hold with pumpkins, ghosts and enchanting decorations. At Sleeping Beauty Castle, favorite Disney Villains – including the devilish sea witch Ursula – take to Royal Castle Stage for a spooky new show alongside Mickey and Friends.

Ursula herself will perform her famous anthem, “Poor Unfortunate Souls” and a brand-new track called “Are You Brave Enough?” that was specially created for the new Disney production and serves as the official theme of the season.

The return of Halloween also means the return of Mickey’s Halloween Celebration cavalcade with a show-stopping Mickey’s Illusion Manor float, featuring the zombies of Phantom Manor and Mélanie Ravenswood in her wedding dress. Disney characters will join in the celebration, including Donald, his nephews Huey, Dewey and Louie, Daisy and the Three Little Pigs.

And speaking of Phantom Manor, the iconic attraction has plenty of surprises in store for guests following its re-opening earlier this year after the attraction’s biggest renovation project ever. Even The Twilight Zone Tower of Terror has a hair-raising new twist with dazzling special effects and new thrilling drop sequences.

Of course, guests will spot Disney characters throughout the park in their best Halloween costumes to pose for photos, like Minnie, Stitch, Goofy’s son Max and the Cheshire Cat from Alice in Wonderland. The bravest can experience an encounter with Maleficent, who will take possession of Sleeping Beauty Castle Courtyard with a briar bush shaped as a dreadful dragon.

Those with a devilish sweet tooth will find treats to suit all tastes, from Cruella cupcakes to Disney Villains shortbreads. Thanks to a tasty collaboration with Belgian chocolate maker Pierre Marcolini, guests staying in select Disneyland Hotel rooms during the season will also find a ‘trick or treat’ box of chocolates waiting for them. There are even new merchandise items on sale throughout the resort, including two new dresses for guests to proudly wear their love for Disney Villains and Halloween.

It’s going to be a wicked Halloween indeed at Disneyland Paris! The question is: are you brave enough?