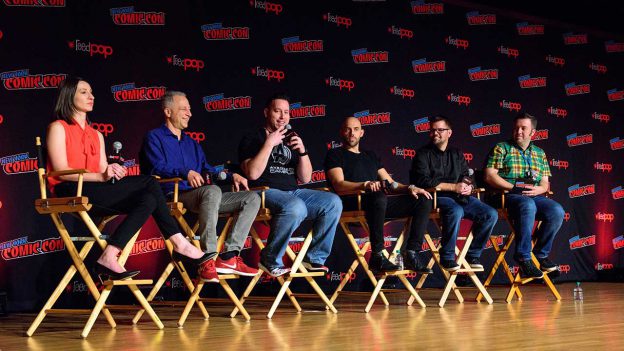 This weekend, I had the privilege of assembling alongside several talented colleagues to present how we are joining our forces to develop amazing Super Hero experiences around the world. I shared the panel stage with Caroline May from Walt Disney Imagineering, Dan Fields from Disney Parks Live Entertainment, Dave Bushore from Marvel Studios, Brian Crosby from Marvel Themed Entertainment and panel moderator Ron Richards, VP, Head of Editorial & Content Distribution – Marvel New Media.

Each of us spoke about the passion we have for bringing these exciting characters to life and highlighted how we’ll be delivering on the authenticity and innovation these stories deserve through our close collaboration. We were happy to present more about what we have coming to Disney parks around the world, including our Avengers Campus at Disneyland Resort and Disneyland Paris; Disney’s Hotel New York – The Art of Marvel at Disneyland Paris; and Guardians of the Galaxy: Cosmic Rewind coming to Epcot at Walt Disney World Resort. It was great to talk directly with some of our most ardent fans, right in the city where this epic story-universe was first created.

Panel attendees also discovered the awesome artwork shown above by artist Liam Brazier featuring the one and only Spider-Man! This is just one of over 300 pieces of art that will be displayed throughout Disney’s Hotel New York – The Art of Marvel, at Disneyland Paris. We can’t wait for you to check it out when it opens next summer!

Throughout the weekend, fans on the show floor will be able to witness an up-close look at the new Spider-Man WEB suit for Disneyland Resort, Disneyland Paris, Hong Kong Disneyland Resort, Shanghai Disney Resort and Disney Cruise Line designed by Ryan Meinerding, Head of Visual Development at Marvel Studios! We have several epic Super Hero adventures coming to Disney parks over the next few years and we can’t wait for you to experience them all!