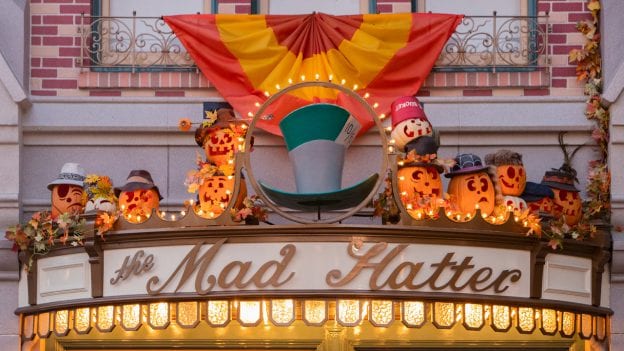 It’s a beautiful time of year with gord-eous fall decor taking over the Disneyland Resort. On Main Street, U.S.A. at Disneyland park, the feeling of fall is all around as you venture through the Pumpkin Festival. Join us as we take a closer look at some of the unique pumpkins featured along Main Street, U.S.A.

In 2006, the Disneyland Resort began decorating for the Halloween season. During this inaugural season, pumpkins were added throughout Main Street, U.S.A., which has become what we know and love today as the Main Street Pumpkin Festival. The iconic Mickey-shaped pumpkin is a photo-moment favorite during the Halloween season. This pumpkin stands 16-feet tall and is ready to greet guests with a warm fall welcome as they make their way inside the Happiest (or Spookiest!) Place on Earth.

As you keep walking down Main Street, you may notice more pumpkins adding to the fall flair. There are over 300 pumpkins in the Main Street windows and on top of store fronts! What’s even more impressive is that no two pumpkins are alike as they are each carved by select members of the resort enhancement team. Each pumpkin has their own unique story that pertains to the location where they are placed.

At 20th Century Music Company, the shop owner has carved a pumpkin that has a strong resemblance to the one and only Elvis Presley. Maybe it’s the pompadour and leafy ruffles that give him away! This pumpkin is an homage to the history of music and what that the store represents. In the window next to the music shop’s door, there is a pumpkin that is playing the trumpet. Not to toot their own horn, but this is one pumpkin whose music is the hit of the pumpkin patch.

Over at the Mad Hatter on Main Street, U.S.A., there are carved pumpkins surrounding the marquee. Each of them are sporting their own hat to represent their unique fashion sense! One pumpkin unleashes their inner tourist with a classic bucket hat, while another wears a literal bucket as a hat. One looks striking in their bowler hat, another is making headlines with their newsboy hat and there is one com-fur-table in their raccoon hat. Head to the Mad Hatter to see what other types of hats are in fashion this Halloween season.

To match the Main Street 1900s time period, the Emporium has many unique window displays that represent what the individual store would offer. Some displays feature unique pumpkins that help to tell the story of the store. In the shaving window, near the Crystal Arcade entrance to the Emporium, sits a gentleman of a pumpkin, getting a shave. He has shaving cream all over his beard and there seems to have been a bit of a mishap — if you look closer, part of his mustache has been mistakenly shaven off! Talk about a “close” shave.

Other windows of the Emporium feature seasonal merchandise and home goods, and also include more specialty pumpkins. At the sewing window, there are vintage sewing machines and sewing supplies with a giant pumpkin acting as a pin cushion. Also, a little further down, there is a sudsy pumpkin in the window with all of the laundry supplies and a vintage washer tub with a wringer. In the China shop window, there’s an homage to the classic Disney film “Beauty and the Beast” with a special Mrs. Potts pumpkin. Mrs. Potts is a tale as old as time and plays into the theming of a shop that used to sell fine China and household goods.

No Halloween season is complete without pumpkins to spice things up! So carve out some time to visit the Disneyland Resort and see the special jack-o-lanterns that light up the Halloween season.