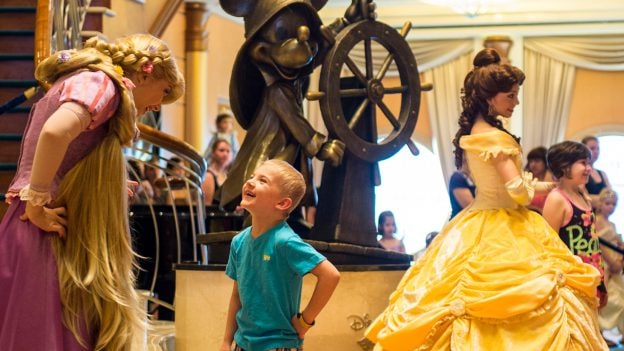 See How Disney Films Come to Life Onboard Disney Ships

Aboard each of our cruises, Disney films come to life in unique and surprising ways. Whether you’re a fan of classic and live-action Disney films, Disney-Pixar, Star Wars or Marvel, here are just some of the ways to become immersed in your favorite stories on your next Disney cruise vacation.

On every Disney ship, there’s an entire deck of spaces designed to inspire and entertain your children! Disney’s Oceaneer Club will transport your kids to places like Andy’s Room inspired by “Toy Story” and Frozen Adventures themed to the “Frozen” films. Kids can even meet some of their favorite Marvel Super Heroes or join the rebel alliance and pilot the Millennium Falcon.

Mealtimes are memorable experiences on a Disney cruise! Aboard each ship, dinner at Animator’s Palate brings the magic of Disney animation into the dining room with scenes and characters from popular Disney and Disney-Pixar films. Experiences may include a visit from Crush, the sea turtle from “Finding Nemo,” a montage of food-themed moments from Disney films, or an animated show about a hero’s journey through Disney and Pixar animation.

At Tiana’s Place restaurant on the Disney Wonder, themed to “The Princess and the Frog,” you’ll enjoy live jazz music and delicious food that draws inspiration from the flavors and ingredients of the Louisiana bayou, plus special touches from the movie like family photos and water-lily-shaped candleholders. On the Disney Magic, dinner at Rapunzel’s Royal Table, inspired by “Tangled,” transports you to the kingdom of Corona to celebrate Rapunzel’s birthday and the anniversary of her return home. You can let your hair down and sing with Flynn Rider while you are eating a feast fit for royalty!

You and your little ones can sing your hearts out to some of the most iconic songs from Disney films while watching our Broadway-style musicals. Shows like “Disney Dreams…An Enchanted Classic” and “The Golden Mickeys” feature favorite characters from Disney films, such as Peter Pan, Beauty and the Beast, Aladdin, Tiana, Anna and Elsa, Cinderella, Ariel, Timon and Pumbaa.

On the Disney Wonder and the Disney Fantasy, you can experience “Frozen, A Musical Spectacular” and follow Anna and Elsa on their journey to discover the meaning of sisterhood. On the Disney Dream, you’ll be treated to an original production of “Beauty and the Beast,” inspired by the live action movie, and aboard the Disney Magic, you can sing along with Rapunzel in “Tangled: The Musical” and Cinderella in “Twice Charmed: An Original Twist on the Cinderella Story.”

During every Disney cruise, your family can enjoy a lively celebration at one of our spectacular deck parties! On most itineraries, you can live the pirate’s life at our deck party inspired by “Pirates of the Caribbean.” Select cruises also offer a Pixar Pals celebration or a deck party themed to “Frozen” featuring the famous royal sisters of Arendelle and their fun-loving Nordic companions. And when you celebrate Star Wars Day at Sea or Marvel Day at Sea, you’ll be treated to an epic deck show featuring tons of characters from these films.

Character encounters are a plenty on each and every Disney cruise! In addition to seeing beloved characters from your favorite Disney films in our youth spaces, dining rooms, stage shows and deck parties, scheduled meet-and-greets take place all throughout the voyage, both on board and on our private island, Castaway Cay.  These character sightings create lasting memories and fantastic photo opportunities for guests of all ages!

To learn more about these fun activities that bring Disney films to life or to book your family’s next Disney cruise vacation, click here.