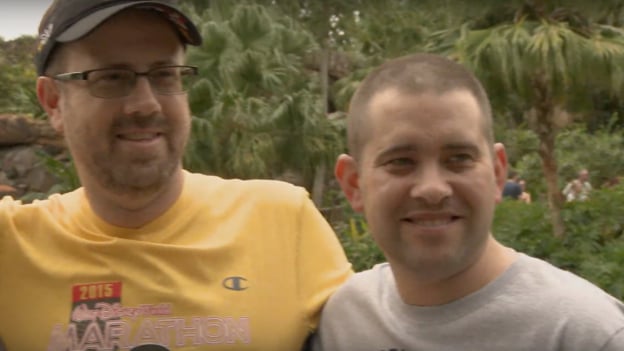 Running a half marathon is an incredible feat itself. Running a half marathon after twice surviving Leukemia is truly miraculous. But that’s exactly what Canadian runner Boyd Dunleavey, 45, did at the Disney Wine & Dine Half Marathon this past Sunday. And waiting for him at the finish line with his medal? The man who saved his life – Nathan Barnes, who donated his stem cells which ultimately gave Dunleavey a new lease on life.

Dunleavey was diagnosed in 2011 with a rare blood cancer – acute myeloid Leukemia – and given a 10 percent chance of surviving more than a few months without a stem cell transplant from a donor outside of his family. After Dunleavey endured a year of treatments and a cancer relapse in February 2012, doctors identified Barnes as a suitable stem cell donor. The challenge? Barnes was in Japan, stationed there as a gunners’ mate in the US Navy. But, finally, in May 2012, Dunleavey had the life-saving stem cell transplant.

“When we found out it was a gentleman named Nathan, it was incredible,” said Dunleavey. “Our middle son’s name is Nathan, and it means ‘Gift of God.’”

Soon after the transplant, Dunleavey began running as part of his recovery, and it quickly became a passion, partly because of his love of Disney. At last count, he has done several half marathons and seven full marathons.

“I never would have run a marathon without Disney,” Dunleavey said. “January 2015 was my first, during the Walt Disney World Marathon Weekend. I’ve run the marathon twice, multiple virtual races, four half marathons, and several 10Ks. The runDisney community is fantastic!”

This past weekend, during the Disney Wine & Dine Half Marathon Weekend, that passion for running led to something even bigger. After more than seven years – while Barnes had been stationed overseas – Dunleavey and his family were finally able to meet the man who saved his life.

“I had no idea you could actually feel this good about something,” Barnes said about their meeting, even before presenting Dunleavey with his medal for running 13.1 miles through Walt Disney World Resort.

“My motto is ‘never lose hope,’” Dunleavey said. “Life is a special gift. We were told that with the stem cell transplant, my chances of living five years were only 30 percent. This is Year 7! Never lose hope.”