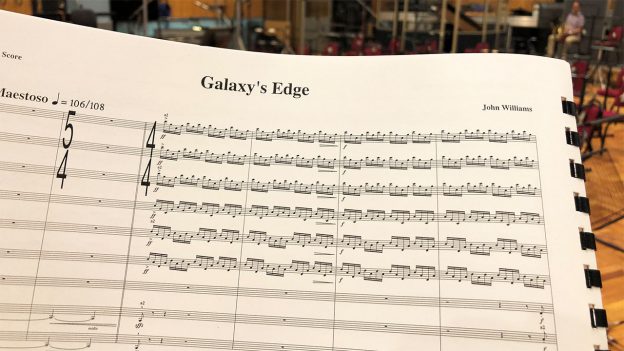 When you think about Star Wars, I’m sure that the iconic music of legendary composer John Williams comes to mind.

Since opening earlier this year, Star Wars: Galaxy’s Edge has welcomed millions of visitors to Black Spire Outpost, with Millennium Falcon: Smugglers Run having taken more than 5 million passengers on daring flights through the galaxy.

The captivating soundtrack to the planet Batuu can be heard in the below video. The original theme is also available to stream on Apple Music*, offering an exciting way for fans to prepare for their upcoming adventure!

Since debuting at Disneyland park and Disney’s Hollywood Studios this summer, Star Wars: Galaxy’s Edge has given guests a chance to live their very own Star Wars adventure. Just earlier this week, it was announced that the Themed Entertainment Association (TEA) recognized Star Wars: Galaxy’s Edge with two Thea Awards for Outstanding Achievement: one for the land itself, and one for Millennium Falcon: Smugglers Run. Additionally, the International Association of Amusement Parks and Attractions (IAAPA) recognized Star Wars: Galaxy’s Edge with three Brass Ring Awards for immersive products and atmosphere entertainment: one in the “Best Hard Good Item” category for Savi’s Workshop – Handbuilt Lightsabers, one in the “Best Plush” category for the Porgs from the Creature Stall, as well as “Best Visual Merchandising” for Droid Depot.

*Music streaming feature requires an Apple Music subscription. Separate Apple Music terms and conditions apply. Subscription plan renews automatically after trial. If you’re under 18, get your parents’ permission first. Apple Music is a trademark of Apple Inc., registered in the U.S. and other countries.