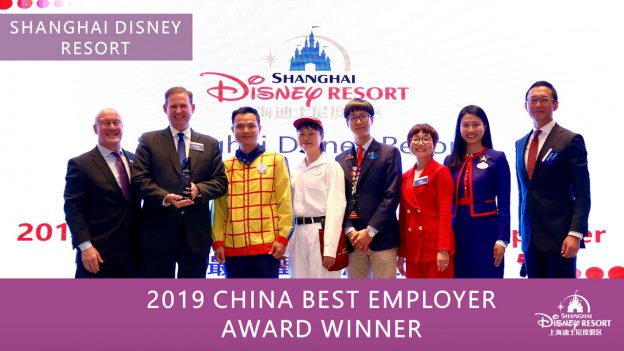 We’re proud to announce that AON has honored Shanghai Disney Resort for the third consecutive year with the 2019 China Best Employer Award, recognizing Disney’s commitment as an employer of choice in China. As one of the most ambitious projects in the history of The Walt Disney Company, Shanghai Disney Resort has impressively won this award every year since its opening a little over three years ago!

The AON Best Employers program has been one of the most credible and comprehensive surveys of its kind in Asia for nearly two decades. This prestigious honor showcases Shanghai Disney Resort as a leading human resources industry trailblazer and recognizes its success in providing unique cast member experiences, talent development, and inclusive and equal opportunities.

Around the globe, Disney is known for its exceptional guest service, but that wouldn’t be possible without our team of cast members in hundreds of different professional roles at Shanghai Disney Resort. From interacting with guests “onstage” to working on projects “backstage” – each cast member is dedicated to bringing Disney magic to guests each and everyday.

To support our exceptional cast, Shanghai Disney Resort has implemented a variety of programs, such as the Employee Assistance Program which mentors young cast members in their personal and professional lives. The Be-Well initiative was also introduced to the resort, which helps cast build healthier lifestyles through expert lectures, group activities, tip sharing, and more.

We are thrilled with the phenomenal success of Shanghai Disney Resort’s first few years, and we’re so excited for the future!