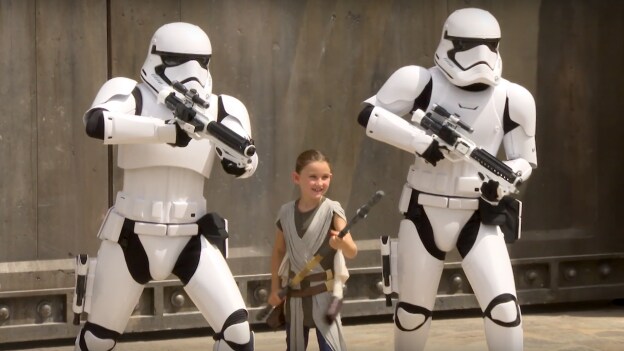 If you’ve had the chance to visit Star Wars: Galaxy’s Edge, then you know Disney cast members and Star Wars characters interact with guests in ways never experienced before in a Disney park.  Everyone is part of your story – helping you live your own Star Wars adventure!

At Star Wars: Galaxy’s Edge, Disney cast members are local citizens of Batuu with their own identities and personas within the stories of their roles in the land.   And each cast member is also a storyteller with a galactic backstory that enhances every Star Wars adventure.

Whether it’s speaking Shyriiwook with Chewbacca, meeting a local at Oga’s Cantina or haggling with a vendor at Black Spire Outpost Marketplace, there’s always an out-of-this-galaxy adventure to be found and shared at Star Wars: Galaxy’s Edge at Disneyland Resort and Disney’s Hollywood Studios.

For more on Star Wars: Galaxy’s Edge, check out our special “Everything Star Wars” page on the Disney Parks Blog.