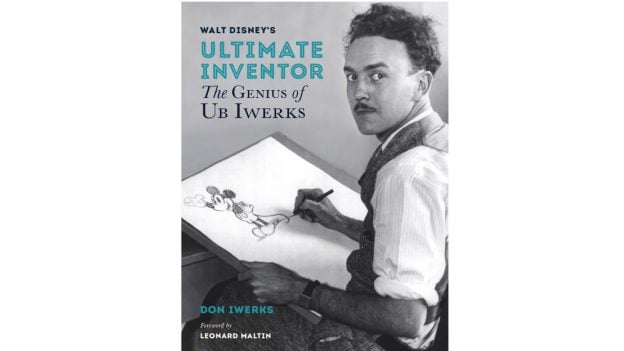 Ub Iwerks: From Mickey Mouse to the Magic Kingdom

“Anyone with even a passing knowledge of animation history knows the name Ub Iwerks,” Leonard Maltin says, “He is the man who almost single-handedly animated Walt Disney’s pioneering sound cartoons ‘Steamboat Willie’ and ‘The Skeleton Dance.’ His granddaughter Leslie titled her documentary feature ‘The Hand Behind the Mouse’ with good reason.”

In his Foreword to the entertaining and beautifully-illustrated new Disney Editions book, Walt Disney’s Ultimate Inventor: The Genius of Ub Iwerks, Leonard Maltin continues, “But this is where our general knowledge of Ub Iwerks winds down. We know he tinkered with technology at the Disney studio for decades but have little idea of his specific contributions.”

Ub’s illustrious career consisted of dozens of innovative contributions, large and small, to both animated and live-action motion pictures, as well as the fields of optics, film processes, and special effects. Within this new overview of his lifelong identity as a “Disney Inventor,” readers will see, in a case-by-case study, how Walt frequently relied on the counsel, expertise, ingenuity, and creativity of this kindred spirit, lifelong friend, and fellow virtuoso——feats of technological magic that are still seen to this day in Disney Parks around the world.

“Iwerks did not have an engineering degree,” Maltin says. “He was entirely self-taught, yet his creations were often masterpieces of ingenuity and practicality. He strove for perfection in everything he did…”

From the earliest development of Disneyland in the early 1950s, Ub was involved in creative and technical problem-solving, ranging from techniques for realistically photographing scale models of attraction concepts to special cameras, projectors, electronics, and audio for attractions. Ub felt right at home engaging in what Walt called “Imagineering—the blending of creative imagination with technical know-how.”

At Disneyland, Ub’s inventions could be simple, but sophisticated in their elegance: a wave projector gave the illusion that the submarine Nautilus was under water in the 20,000 Leagues Under the Sea attraction in Tomorrowland; a simple lighting effect gave the illusion of a mountain of burning spinning wheels in the original Sleeping Beauty Castle walk-through.

One of Ub’s most unique, distinctive, and groundbreaking concepts grew (as many of his innovations did) out of a hallway conversation with Walt. In the early 1950s, wide-screen pictures had become the latest craze in Hollywood. Walt had been impressed by the groundbreaking motion picture presentation and sound technology of “This Is Cinerama,” which had premiered in Hollywood in the spring of 1953. One afternoon shortly after seeing it, Walt casually asked Ub if it would be possible to photograph and project a 360-degree movie—a sort of “Cinerama in Surround.” “If we could do that,” Walt said, “we could find a sponsor and it could become an attraction at Disneyland.” Ub answered, “Yes, I am sure that it can be done.” Walt said, “Why don’t you check into it, and see what you can come up with?”

Within a few days, Ub had worked out an idea for a circular camera and “surround” projection system. Over the decades, “Circarama,” and its successor technology “Circle-Vision 360,” was seen in Disney Parks around the world. Even today, Reflections of China screens in the China pavilion at World Showcase in Epcot, adjacent to another encompassing 360-degree motion picture, O Canada! which shows in the Canada pavilion.

Yale Gracey is fairly well-known by fans as the “illusioneer” behind so many of the eerie effects in the Haunted Mansion. But making those illusions technically viable—and efficient and durable enough for daily use—often fell to Ub.

For example, Ub made the concept of several applications of moving faces on static objects, such as Madame Leota inside her eerie crystal ball, or “Little Leota,” who encourages departing visitors to “Hurry baaa-ack,” into a viable reality. The quintet of “singing headstones” in the graveyard, for instance, used a new Ub-designed Disney 16mm projection system, equipped with incandescent lamphouses and automatic bulb changers. All five projectors in the Graveyard scene are synchronized with the audio track, as the headstones sing their haunting harmony. Ub and Yale had everyone fooled. For years, people outside of Disney would ask questions like, “Which laser are you using for that effect?” The actual effect was a mystery—and a well-kept secret—for a very long time.

Ub’s last major parks project was the immense technical need of the Hall of Presidents in Magic Kingdom Park at Walt Disney World Resort, with its epic combination of projection, lighting, and Audio-Animatronics techniques.

In the show, before the curtains open to reveal the presidents, a film presentation described various historical challenges to the Constitution, and its importance to maintaining the Union. It was determined that to make the film in live-action film would have been cost-prohibitive, and would instead be best accomplished with artwork photographed a frame at a time, the way animation is filmed. Large detailed paintings in the same proportion as the long screen—which would be two stories high and 200 feet wide—were created under the direction of four-time Academy Award®-winner John DeCuir Senior, working daily for two years to create 85 masterpieces—some more than 40 feet long—in the style of the period when each specific action takes place.

Ub’s last, but by no means least challenge—what kind of camera and projection system could be used to present a film on a two-hundred-foot-long screen? It would be impossible to project such a large image using one projector, so Ub decided that the screen could be filled by five adjoining 70mm projections—each forty feet in width with its own projector—to produce a continuous image.

“Along with the entire Disney organization,” the book relates, “Ub had been under tremendous pressure to complete his work in time for the October 1971 grand opening of Walt Disney World. The machine shops and soundstages at the studio, WED Enterprises, and MAPO were alive and humming with the industrious activity of creating the hardware, technology, and mechanics of bringing imagination to reality. It had been a part of the culture that Walt and Ub had created as far back as Kansas City: Dream. Create. Solve problems. Make the impossible possible.”

Ub reached the age of 70 in March of 1971, but in late June, he suddenly suffered a heart attack. Just as he seemed to be rebounding, on July 7, 1971, Ub suddenly passed away, ending an extraordinary life and remarkable career. “His mind and spirit were as strong as ever, but his heart could not carry him any further. Without Ub, his final project was now left to his dedicated coworkers to complete.”

Walt Disney’s Ultimate Inventor: The Genius of Ub Iwerks has a unique perspective and erudition that no other book of its kind can claim—because the author of this fascinating work is no less an authority than Ub’s son, Don Iwerks, who followed his father to The Walt Disney Studios where Don also developed technology still used in Disney parks around the world. This never-before-told facet of Disney biography and technology is a worthy addition to the library of any Disney fan.

“In writing and researching this book, Don Iwerks has not only done a great service to posterity and filled a void in Disneyphiles’ knowledge,” Leonard Maltin says, “he has also paid loving tribute to his father in a way his dad would have truly appreciated.”