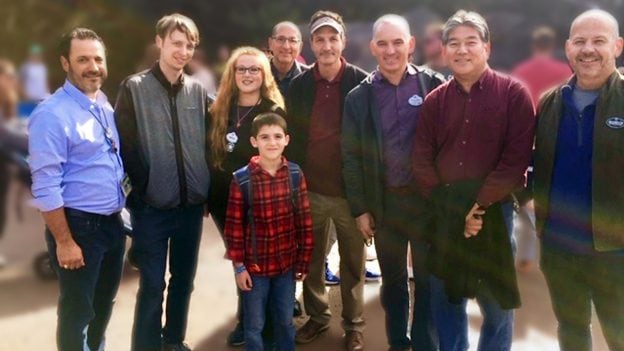 “What do you want to be when you grow up?”

At just 10 years old, Dominick (Dom) Masi from Ft. Lauderdale, Florida knows exactly how to answer that question: He wants to be a Disney Imagineer. So, when his parents took him to Disney’s Hollywood Studios to be among the first to experience Star Wars: Rise of the Resistance, imagine the excitement in Dom’s eyes when he found himself face-to-face with a few of his role models from Walt Disney Imagineering just seconds after disembarking the attraction!

Whether the moment happened by magic, or through the Force, Dom was in total awe. As a lifelong Annual Passholder and creative kid with a booming imagination, Dom’s hero has always been Walt Disney, or as he calls him, “Mr. Walt.” He loves spending his free time learning about the magic behind the scenes and brushing up on Disney history – from the engineering of beloved attractions, to backstories of adored Disney characters and the creation of Disney parks around the world. Lately, he’s been watching (and re-watching) “The Imagineering Story” on Disney+.

Although he didn’t know he would be meeting the Imagineers during his visit, Dom came prepared, researching everything he could find about Star Wars: Rise of the Resistance and learning more about what is one of the most ambitious and immersive experiences ever created for a Disney park.

Like many kids his age, Dom is sometimes a bit shy, but when a cast member introduced him to the Imagineers, he completely came out of his shell, telling them all about his passion for dreaming up and creating new things, and how he’s an aspiring Imagineer himself. The Imagineers gave Dom a glimpse into a day in the life of Walt Disney Imagineering and even shared some fun facts and insider details about how they brought the attraction to life (including Dom’s favorite part – the fall from space and crash landing back on Batuu!).

Meeting some of the people Dom has looked up to his entire life “meant the world to him and to our family,” his dad said afterward.

“We were thrilled to meet Dom and his entire family,” Walt Disney Imagineering Executive Producer Jon Georges said. “It was incredibly special to hear about his passion for Disney and our team. We can’t wait to see where his creative mind and imagination will take him next!”