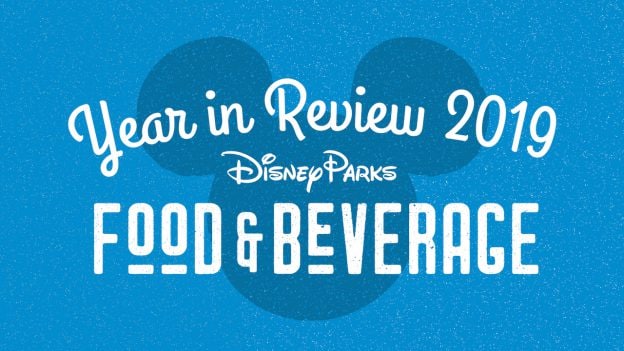 Looking back on 2019, this year was an incredible year for Disney foodies! From new openings, yummy treats, plant-based dishes, dining experiences, and so much more, this past year was full of delicious memories at both Disneyland and Walt Disney World Resorts. Here are just a few highlights from throughout the year!

Of course, our biggest opening this year was celebrated on both coasts. Star Wars: Galaxy’s Edge opened at both the Disneyland Park and Disney’s Hollywood Studios, letting us travel to a galaxy far, far away. We piloted the Millennium Falcon and explored a new world in the Star Wars universe, but most importantly, we FINALLY GOT TO TASTE BLUE MILK! One of the lands most popular offerings, Blue Milk has become a staple for any galactic traveler visiting the Black Spire Outpost. At Star Wars: Galaxy’s, you can also dine at Docking Bay 7 Food and Cargo, grab a Ronto Wrap at Ronto Roasters, or kick back and mingle with other smugglers and ruffians at Oga’s Cantina.

We also announced several exciting new projects coming in 2020 to Walt Disney World Resort, and you won’t want to miss any of them! Dine in true toy-fashion at the Roundup Rodeo BBQ Restaurant coming to Toy Story Land at Disney’s Hollywood Studios, or try different BBQ flavors from around the country at Regal Eagle Smokehouse: Craft Drafts & Barbecue at Epcot. You’ll also soon be able to travel 220 miles above Earth’s surface to dine at the Space 220 Restaurant at Future World in Epcot, offering celestial views of our beloved planet. And at Disney Springs, even more foodie spots are on the way including City Works Eatery and Pour House, Beatrix, and Ample Hills Creamery. All of these new restaurants will open in 2020, so be sure to keep an eye out for all of the announcements throughout the year!

In addition to new restaurants, we had tons of special events, limited-time menus, and themed treats throughout the year. Our chefs created countless new imaginative items from Potion Purple and Arendelle Aqua cupcakes and Lion King-inspired bites at Disney’s Animal Kingdom Theme Park to eats and treats celebrating the 50th anniversary of the Haunted Mansion and the 30th anniversary of Disney’s Hollywood Studios.

Finally, I have to highlight all of the amazing Halloween and holiday goodies our pastry chefs baked up this year. From specialty churros and cupcakes to sundaes, macarons, cake pops, and more, this year’s array of treats once again delighted our taste buds and kept us coming back for more!

It’s been an incredible year for Disney Parks Food & Beverage, and we can’t wait for what’s in store for 2020! Be sure to keep an eye out on the Disney Parks Blog for more Foodie Guides, restaurant announcements, and more throughout the year.