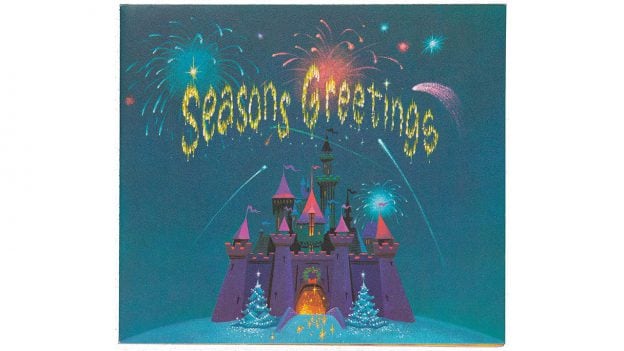 “Well, here it is, another Christmastime…One of the nicest things about the holiday season is exchanging greetings with our many friends—for these messages from all over the world represent the true spirit of Christmas in many different ways.”

I have a confession to make.

Of the more than 30 volumes I’ve written, I think From All of Us to All of You: The Disney Christmas Card is my favorite.

Promise you won’t tell any of my other books I said that?

First of all, I love Christmas time. Like so many people, I have since childhood. The music, the imagery, the sociability, the stories, the movies, the underlying culture and message of the season is so affirming, reassuring, and deeply pleasant. Nostalgia for the past, hope for the holidays yet to come, and the sharing and enjoyment of Christmas present. My favorite book of all time? A Christmas Carol by Charles Dickens.

I love the history and culture of Disney as well (of course), and with the Christmas cards, through the glorious Disney tradition of art, one can see not only a variety of art styles, and a unique collective of artists, but also a microcosm of a century of cultural history—and a visual timeline of the story of The Walt Disney Company.

The annual holiday greeting always served to remind the recipients of the heart space that Disney occupied in their lives, and featured beloved characters and stories alongside current and upcoming Disney projects. Former Disney archivist Robert Tieman recalled Disney publicity artist Bob Moore’s memory of the complexities in creating the cards: “Bob Moore admitted it was tricky to capture so much—past, present, and future projects—in the space of one card, but the results were always a beautiful tribute to a year’s work.”

In 1954, as a groundbreaking television program introduced a whole new Disney entertainment medium the back of the annual holiday card presented a dream about to be realized: Disneyland.

Of course, with the July 1955 grand opening of Disneyland, that blockbuster project became the joyous centerpiece of that year’s Christmas card. (The cards typically contained a calendar for the following year, people would keep them on a desk or bulletin board for both practical and emotional reasons.)

It wasn’t every year that Walt’s park was the featured image of the greeting. In 1962, however, Sleeping Beauty Castle took center stage again, the international theme of the Disneyland “Christmas in Many Lands Parade” that was then part of the holiday celebration at the park was the global theme, as well as a play on the recently-retitled weekly Disney TV hour, Walt Disney’s Wonderful World of Color.

As the years passed, of course there were other projects, and other parks and resorts to showcase. The 1971 card represented the recent opening of Walt Disney World Resort—and designer Bob Moore’s ongoing fascination with elaborate paper mechanics. This greeting was an intricate hexagonal mechanical design that unfolded from a small “gift box” into a panoramic photographic view of the Magic Kingdom across Seven Seas Lagoon.

The ambitious Walt Disney World expansion of EPCOT Center (now Epcot) was the biggest project in the history of the company—and the largest private construction project in the world at the time. Naturally, Walt Disney Productions touted this endeavor in any and every manner and medium. On the 1982 card, Tinker Bell, the costar of “Peter Pan,” which was re-released to theaters that December, presents an aerial view (by artist Clem Hall) of the enormous and dazzling new Disney project.

Disney Parks’ first international expansion was as proudly celebrated as any of its precursor projects. A freak 1983 blizzard blanketed Tokyo Disneyland with an extraordinarily picturesque coat of winter white—and the staff photographers and employees all knew that the first Disney park to be covered with a natural snowfall was well worth documenting. Many thought the 1984 holiday card was achieved with Disney magic, but that’s a real Disney-land, in a real snowstorm. Retired Disneyland International Chairman and Disney Legend Jim Cora tells remarkable stories about how the park remained in operation, with “all hands on deck,” improvising with “McGyver” ideas, such as snow shovels made of half-sheets of plywood nailed to two-by-fours, and inventing procedures on the spot for a completely unexpected circumstance.

As had been the case in Tokyo in 1983, Disneyland Paris saw an unusual snowfall in 1997, and the photographers were ready. A winter fantasy of Le Château de la Belle au Bois Dormant on the front of the 1997 Company Card opened to reveal a greeting from Mickey standing in the snow in front of the castle.

The annual company holiday card has for decades been an example of corporate pride in achievements of the year past, or a preview of the year to come. Celebrating the upcoming opening of Disney California Adventure park, the 2000 card featured a snowcapped Grizzly Peak, the mountain icon of the new park. Unlike the Tokyo and Paris castles, this image utilized “photographic Imagineering” to powder the peak with winter white.

With so many varied business units, so many locations worldwide, and so many employees and business relationships, the creation of a single holiday greeting to meet every need of the company proved less practical. Each individual business unit was given the latitude to create their own Christmas cards based on its specific needs and recipients. Physical cards continued to be produced, and the advent of digital online “e-cards” meant many innovations—unique animated greetings, complete with music and personalization—have become standard throughout the company.

The Disney Christmas card has diversified, grown, and changed over nearly a century, leaving a legacy of beautiful art, touching stories, and warm feelings—and even in its modern incarnations it continues to carry the good wishes and sentiments of the season, “from all of us to all of you.”

So, I think one of the reasons I love this book so much is because I love Christmas, and I love Disney. And why not? The traditions of Disney and the traditions of Christmas are kindred. A reliance on warm feelings, the closeness of family, joyous celebration, lavish entertainment, good-hearted fun, and a passing on of beloved customs are common legacies of the holiday and the Disney culture.

In both cases, we look back in order to look forward. We take the best of who we have been, and use it to give the best that we can to our heirs. Just as we continue to sing Christmas Carols or read Dickens, send our Christmas cards, or watch Miracle on 34th Street with our children, we draw from the past and create anew.

As Dickens wrote in The Pickwick Papers, “How many old recollections, and how many dormant sympathies, does Christmas time awaken!”

The same is true of Disney.