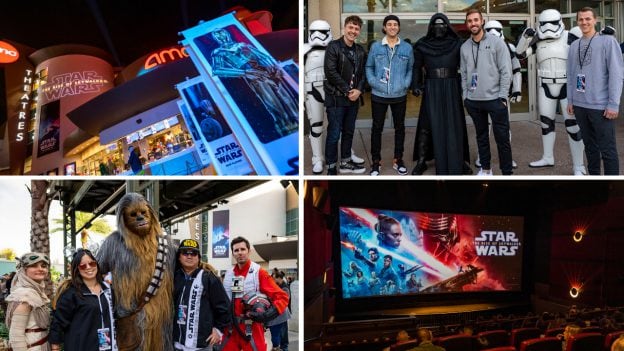 Last Thursday, Disney Parks Blog readers gathered at AMC Disney Springs 24 to be among the first to view Star Wars: The Rise of Skywalker – witnessing the epic conclusion of one of the most beloved film franchises in history.

In Star Wars: The Rise of Skywalker, Lucasfilm and director J.J. Abrams join forces once again to take viewers on an epic journey to a galaxy far, far away with the riveting conclusion of the seminal Skywalker saga, where new legends will be born and the final battle for freedom is yet to come.

As always, our readers arrived showing their excitement for the film by dressing in their Star Wars best – some even created their own Star Wars-inspired outfits! In addition to viewing the film, the group also got to enjoy appearances by costumed fan groups including the 501st Legion, which offered plenty of photo ops.

Check out the video above for a full look inside the night. Catch Star Wars: The Rise of Skywalker yourself at theaters nationwide now!