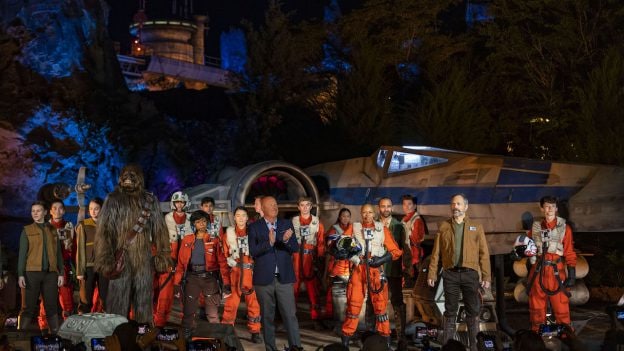 This week, we celebrated the debut of Star Wars: Rise of the Resistance at Star Wars: Galaxy’s Edge with an amazing live stream of the attraction’s official dedication at Disney’s Hollywood Studios.  If you missed it, you can still watch this weekend.

Star Wars: Rise of the Resistance is one of the most ambitious, advanced and immersive experiences ever undertaken by Disney Imagineering.  On each adventure, guests will join the Resistance and depart from Batuu in a transport ship to meet General Leia Organa at a secret rendezvous point. However, on their way to the hidden base, guests are intercepted and taken prisoner by the First Order as their ship is drawn into the hangar bay of a Star Destroyer. The action then ramps up as guests seek to escape the clutches of Kylo Ren and the First Order.

Check out our earlier Star Wars: Rise of the Resistance story for more details.

Also this week, Disney Parks, Experiences and Products Chairman Bob Chapek shared exciting updates on some of the experiences currently in development across the resort, including the announcement that Mickey & Minnie’s Runaway Railway is opening March 4, 2020 at Disney’s Hollywood Studios.

Star Wars: Galactic Starcruiser will also begin “transporting” guests to a galaxy far, far away in 2021!  In this new type of immersive vacation, you’ll become the hero of your own adventure in an experience that surrounds you 24/7 in Star Wars storytelling.

There are many more exciting updates in our earlier New Details, Dates for Experiences at Disney Parks story.