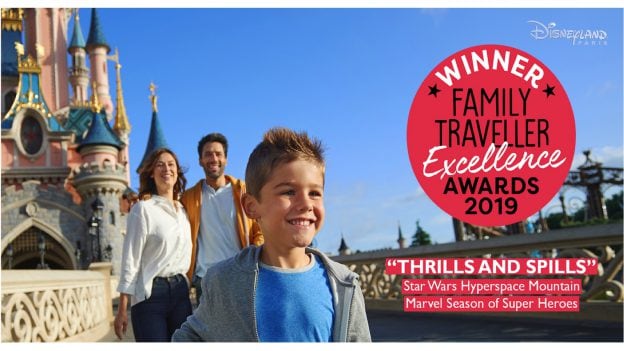 At Disneyland Paris – and at all Disney Parks – delivering exceptional experiences and exceeding guest expectations is at the heart of everything we do. We are the destination where guests can step into the magic of beloved Disney stories and fantastic franchises, from “Frozen” to Star Wars to Marvel and more.

In recognition of this commitment, Disneyland Paris was recently honored with Family Traveller Excellence Awards for Star Wars Hyperspace Mountain, Marvel Season of Super Heroes and Villages Nature Paris, selected by more than 100,000 voters among the top 50 exceptional family experiences around the world. These awards that come directly from our guests and the public which are regarded among our highest honors, inspiring us to work harder to continue living up to even higher expectations for excellence!

We were also just named the World’s Leading Theme Park Resort for the second consecutive year by World Travel Awards, which celebrates excellence across the global travel and tourism industry.

In addition, Disneyland Paris received the title of 2019 Best Family Park in Europe by European Star Awards in recognition of entrepreneurship, courage and innovation within the European theme park industry. Four attractions were ranked in the Top 10 for Best Dark Rides in Europe – Ratatouille: The Adventure, Pirates of the Caribbean, The Twilight Zone Tower of Terror and Phantom Manor.

And from Parksmania Awards, The Lion King & Jungle Festival was named European Top Attraction following its premiere at the resort this summer. If you haven’t heard, this adventurous season will return to the resort in 2020!

Behind the magic, Disneyland Paris received a 2019 Disability Matters Europe Marketplace Award and Villages Nature Paris received a Silver Award from the World Travel Market Responsible Tourism Awards. Being recognized by our fellow peers in this industry is a great honor, as we continue to commit ourselves to providing the best possible experience for all guests while also seeking out innovative solutions which minimize our impact on the environment.