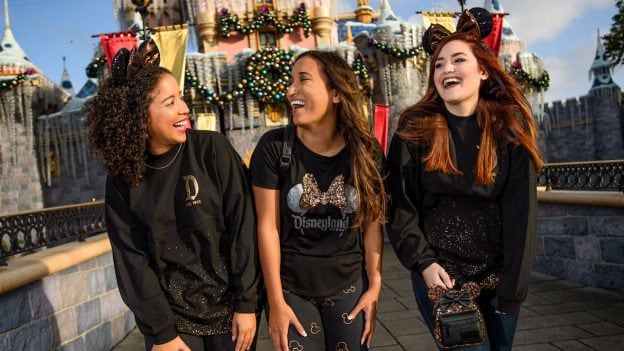 Latest Color Collection, Belle of the Ball Bronze, Debuts at Disney Parks Around the World and Online at shopDisney

We can’t contain our excitement for the debut of the latest new color collection, Belle of the Ball Bronze, as it hits Disney Parks around the world and online at shopDisney.com today!

Say “Bonjour!” to this sparkling collection featuring a wide assortment of items, from headwear and accessories to men and women’s apparel. There is something for everyone. Don’t believe me? Ask the dishes!

At Walt Disney World Resort, show off your bling with a variety of Belle of the Ball Bronze items, including a Minnie Mouse ear headband, baseball hat, Walt Disney World spirit jersey, and even a baseball hat. Then, join the fairytale along Belle herself in New Fantasyland at Magic Kingdom Park.

These glowing items are available at:

At Disneyland Resort, get ready to rock your all-new Belle of the Bronze wardrobe, including a sweatshirt, women’s T-shirt, mini backpack by Loungefly, leggings, baseball hat, and of course, Disneyland spirit jersey. Be sure to pick up a Belle of the Ball Bronze Mickey Mouse plush, just in time for the holidays. Then, grab a bite at Red Rose Taverne, a charming fairytale eatery in Fantasyland, before you meet Belle face to face at Royal Hall! Pick up these exciting new items at:

We all know that beauty is within, but who says you can’t wear it as well at Hong Kong Disneyland? Be sure to pick up your Minnie ear headband, mini backpack by Loungefly, and women’s t-shirt while you indulge in a delectable egg puff with Earl Grey tea custard or a mouthwatering milk & dark chocolate mousse cake. These delightful treats are anything BUT the “same old bread and rolls.”

At Shanghai Disney Resort, rock the new Belle of the Bronze ears while checking out the Mandarin production of award-winning hit Broadway musical, “Beauty and the Beast” in the Walt Disney Grand Theatre at Disneytown! Above, check out actress Gloria Guo (“Belle” in the production) sporting the headwear in the lobby of the Grand Theatre!

Can’t make it out of your castle to the Disney parks? No problem! Eight of these glittering items, including an ornament, Loungefly backpack wristlet, and Minnie ear headband, are available on shopDisney.com.

Don’t forget to use #BelleoftheBallBronze when you venture to the great wide somewhere wearing your “Beauty and the Beast”-inspired styles!

Likes (7)
Share Latest Color Collection, Belle of the Ball Bronze, Debuts at Disney Parks Around the World and Online at shopDisney