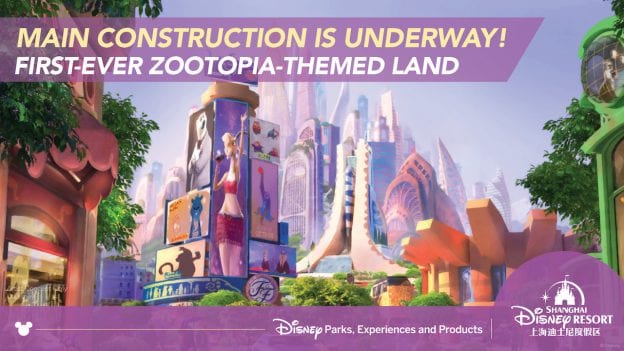 Earlier this year, we announced a new “Zootopia”-themed land coming to Shanghai Disney Resort. Now we’re thrilled to share that main construction has officially begun for the second biggest addition to the park! The eighth themed land will be an immersive mammal metropolis that brings a variety of fan-favorite Zootopia citizens to life.

This exciting expansion will allow guests to experience signature key offerings like new “Zootopia”-themed merchandise, entertainment and creatively curated cuisine. The land will also feature a new major attraction – one that’s sure to create unforgettable guests memories with its innovative technology and immersive storytelling.

“This is an immensely exciting time for Shanghai Disney Resort and Zootopia fans alike,” said Joe Schott, President and General Manager, Shanghai Disney Resort. “Since we announced the development of our new Zootopia-themed land earlier this year we have been overwhelmed by the excitement and anticipation expressed by fans from across China and around the world. We are pleased to announce the start of main construction for the new land, a significant milestone in its development.”

The world’s first-ever “Zootopia”-themed land was ignited following the phenomenon behind the major Walt Disney Studios’ film. The movie captivated age groups and audiences globally, and even won an Academy Award. Fan-favorite characters like Judy Hopps and Nick Wilde, will welcome their fellow citizens including Flash the Sloth, Gazelle, Officer Clawhauser, Chief Bogo, Yax the Yak into their own special home at Shanghai Disney Resort!