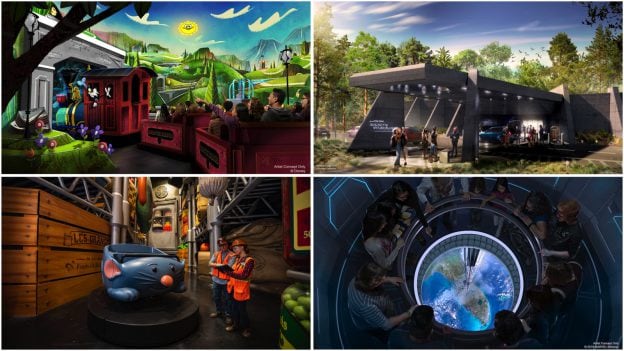 As many of you know, Walt Disney World Resort is undergoing its most significant period of growth in decades.  And today, Disney Parks, Experiences and Products Chairman Bob Chapek shared exciting updates on some of the experiences currently in development across the resort.

Remy’s Ratatouille Adventure will open summer 2020 in the France pavilion at Epcot and today we shared a new image showing Disney Imagineers at work creating the immersive attraction. The attraction brings guests on an adventure with Chef Remy through Gusteau’s restaurant. More details here.

Mickey Shorts Theater in Disney’s Hollywood Studios will show an original short film in the style of the popular Disney Channel animated series “Mickey Mouse,” and will feature photo-opportunity locations for guests.  Today’s new rendering shows the interior of the theater, including fun Mickey Mouse-themed seats.

“Beauty and the Beast Sing-Along” in the France pavilion is directed and produced by Don Hahn, producer of the animated and live-action “Beauty and the Beast” films, and invites guests to participate in a twist on a tale as old as time. It also features narration from Angela Lansbury, who played Mrs. Potts in the original film. The new sing-along will run in rotation with “Impressions de France,” which will receive an upgrade to 4K projection.

“Canada Far and Wide in Circle-Vision 360” in the Canada pavilion is an update to the previous “O Canada!” film with new scenes, a new musical score by Canadian composer Andrew Lockington and new narration by award-winning actors Catherine O’Hara and Eugene Levy.

Space 220 Restaurant debuts this winter!  Space 220 is a new table-service restaurant at Epcot next to Mission: SPACE. When you enter the restaurant, you’ll step into a special space elevator that will take you 220 miles above the earth’s surface and offer incredible celestial views. More details.

Roundup Rodeo BBQ Restaurant is coming to Toy Story Land at Disney’s Hollywood Studios in 2020 and invites you to a rootin’, tootin’ rodeo right in Andy’s backyard! This immersive restaurant will provide yet another unique, fun, family-friendly dining experience that could only be had in Toy Story Land.