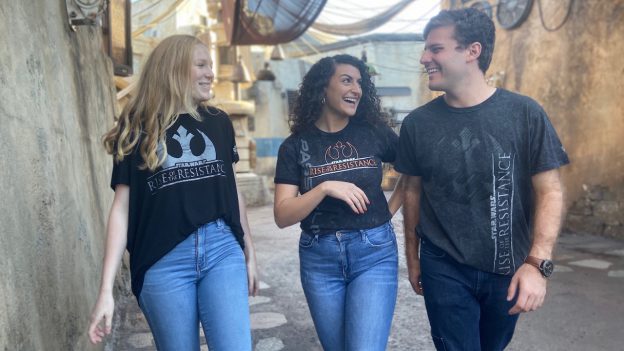 Star Wars: Rise of the Resistance will be one of the most ambitious, advanced and immersive experiences ever undertaken by Walt Disney Imagineering. The lines between fantasy and reality will be blurred and will put guests in the middle of a climactic battle between the First Order and the Resistance. If you’re looking to commemorate the opening of this epic experience, we’ve got great news for you! New merchandise inspired by the attraction will be coming to Disney’s Hollywood Studios and Disneyland park starting on Dec. 5, 2019.

This collection includes apparel and accessories suitable for any Rebel including all-new tees, a baseball cap, a tumbler and open edition pins. The merchandise showcases the symbol of the Resistance, which is a starbird that can be spotted on the helmets and uniforms of members of the Resistance.

Guests can purchase a collectible toy inspired by the attraction vehicle. The item will be available at Disney’s Hollywood Studios on Dec. 5 and at Disneyland park on Jan. 17.

Walt Disney World and Disneyland Annual Passholders will have an opportunity to purchase an exclusive tee just for them! Passholders can use their 20% discount on all merchandise.

Merchandise will also be available in Once Upon a Time on Sunset Boulevard at Disney’s Hollywood Studios at Walt Disney World Resort. Stay tuned to the Disney Parks Blog for more updates on Star Wars: Rise of the Resistance. The highly anticipated attraction opens on Dec. 5, 2019 at Disney’s Hollywood Studios and Jan. 17, 2020 at Disneyland park. Let us know your favorite item from the collection in the comments below!

All merchandise is subject to availability, while supplies last.