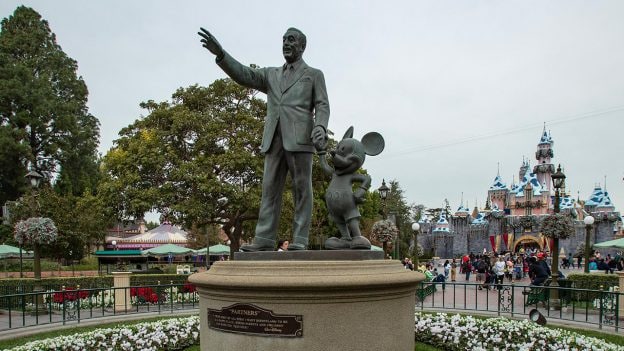 Today in Disney History: Walter Elias Disney Was Born in 1901

Today is the birthday of Walter Elias Disney, the founder and creator of The Walt Disney Company. Over the years, Walt had many creations that sparked magic into the world, including “The Happiest Place on Earth,” the Disneyland Resort! In honor of his birthday, we are looking back at how Walt imagined Disneyland and where his presence can be found throughout the park today.

We all know “that it was all started by a mouse.” However, did you know that the idea for Disneyland started on a bench? Walt would often have a “daddy’s day” with his daughters, Diane and Sharon, at Griffith Park in Los Angeles. As they rode the Merry-Go-Round, Walt would find himself sitting on a park bench, wondering about the possibility of building a place where children and their parents could have fun together. It was there that Walt came up with the idea for Disneyland. Today, we have our own piece of history at the Main Street Opera House in Disneyland park where you will find Walt’s original bench from Griffith Park.

By mid-1954, Walt’s idea for Disneyland finally became a reality when he broke ground on a patch of land in Anaheim, California. Walt was dedicated to this project and found himself spending many hours at the Disneyland construction site. However, Walt and his family lived more than 40 miles away. Thus, Walt had an apartment built above the Main Street Firehouse to ensure that he could spend more time at Disneyland and could be a part of every step of the creative process.

The apartment, which is still located above the firehouse, is 500 square-feet and has two twin hide-a-beds, a kitchenette, a powder room and a bathroom with a shower. In the kitchen, Walt had a small machine that he used to make grilled cheese and heat up chili, two of his favorite foods. The apartment was designed by Lillian Disney and the Academy Award winning set decorator for Mary Poppins, Emile Kuri.

Perhaps the most iconic piece of furniture inside the apartment is a small, Victorian-style lamp. When Walt would visit Disneyland, Cast Members would know he was “home” because all the lights would be on in the apartment. Today, the lamp is always lit to symbolize that Walt is always here at Disneyland. If you’re at the Disneyland Resort during this holiday season, be sure to stop and admire the light-up Christmas tree in the window in place of the lamp.

Another place where you can feel Walt’s presence at the Disneyland Resort is the Disneyland Railroad. As Walt Disney grew up in the early 1900s, he was surrounded by trains and grew to have a passion for locomotives.

In 1947, Walt started transforming his family’s new home in Los Angeles into a half-mile circuit for his 1/8-scale custom built, steam-powered engine. The Carolwood-Pacific Railroad debuted in 1950 and its engine was named “Lilly Belle” as a dedication to his wife. Walt Disney’s backyard train was so popular with his friends and family that, when Disneyland opened in 1955, Walt debuted the first rendition of the Disneyland Railroad we know of today, originally known as the Santa Fe & Disneyland Railroad.

So, Happy Birthday to the man who started it all – his passion and creativity has brought magic and pure happiness to billions of people around the world who visit the Disneyland Resort. I hope on your next visit, you can take a moment to admire Walt’s legacy and think of the magical memories you have created at Disney Parks thanks to his unique vision.